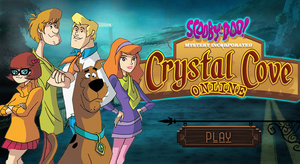 Costumes from the Museum

Weapons for the player

Weapons for the monsters

The bonus mystery is a dream that Shaggy had.

Locations that can be reached by the Mystery Machine

Retrieved from "https://scoobydoo.fandom.com/wiki/Scooby-Doo!_Mystery_Incorporated:_Crystal_Cove_Online?oldid=368840"
Community content is available under CC-BY-SA unless otherwise noted.