Scoobypedia
Register
Don't have an account?
Sign In
Advertisement
in: Animated films, Direct-to-video films, Scooby-Doo! Music of the Vampire

This article is about the film. For other uses, see Scooby-Doo! Music of the Vampire (disambiguation).

Scooby-Doo! Music of the Vampire is the seventeenth in a series of direct-to-video films based upon Hanna-Barbera's Scooby-Doo Saturday morning cartoons. It was released on March 13, 2012.

The gang attend a vampire themed music festival. During which a real vampire chooses Daphne for his bride.

Tulie sings a song about the bayou and fights off gators that interrupt his fishing. He addresses the audience (or whoever his addled mind makes him see), and shows a crown he found in the swamp that came from an unwilling vampire bride. He interrupts himself to say he must go back to the beginning.

The gang is investigating the sewers under a factory. Fred warns Shaggy and Scooby that the Cockroach Monster is coming their way, and they think they see it, but the rest of the gang arrives and shows them it was just a regular cockroach casting a large shadow. Then the real monster shows up. Velma manages to subdue it by opening a pipe and spraying it with high-pressure water. It turns out to be Mr. Clopper, who wanted to build up his extermination business. Velma looks around and sees the rest of the gang is in a bad state: Fred stuck to the flypaper he wanted to use for a trap, Shaggy and Scooby fainted on the ground, and Daphne panicked by the regular cockroach. Velma suggests it's time for a vacation, and everyone agrees.

On the road in the Mystery Machine, Velma won't reveal the destination until they get there. Shaggy says he doesn't care as long as there are no monsters. The whole gang breaks into song about this, as Velma drives in a reckless way that manages to get them there. They arrive at Chauve Sourie Ville, a small town in Louisiana which is hosting a vampire festival called "Vampire Palooza." Shaggy and Scooby complain about this, but the others tell them the vampires aren't real and there's nothing to be afraid of.

They enter the festival, meeting Jesper Poubelle (an anti-vampire agitator), Lita Rutland (the festival organizer), and finally Vincent Van Helsing (their host, and the unsuccessful author of vampire books). Van Helsing takes them to see his vampire museum and shows off a set of vampire wedding jewelry and the real jewel of his collection, a glass-faced casket containing the inert body of Vadronya, a centuries-old vampire.

It is time to go to a show performed by Fangenschanz, a troupe of "vampire" actors that only perform at night. After an introductory song by their leader, Bram, they attempt a vampire resurrection chant. Valdronya appears, and it's not the actor the troupe expected to play the role (named Henry), but the real thing. Valdronya flies off, and the audience applauds and leaves, thinking it was all part of the act. Van Helsing thinks it was real because they used an authentic magical ritual. He berates the actors, but Daphne seems quite taken with Bram, making Fred jealous.

The gang offers to investigate, and heads back to the museum to see if Valdronya has really left his tomb. They find the tomb empty but still sealed. As they puzzle over this there is a crash and the vampire jewels are stolen. Valdronya flies up and takes a close look at Daphne, whom he says would be a good bride. The others come after him with stakes, so he flies away.

In Van Helsing's home the next day, they talk with Daniel, a security guard they found unconscious in the museum. He has what look like vampire bite marks on his neck, but they quickly prove he just fell and zapped himself with his own taser.

Out on the festival grounds, they find Lita Rutland wants to profit from the publicity of the vampire appearance. She tells a phony story about being attacked that gets on the news. Jesper Poubelle also gets a media exposure benefit for his anti-vampire crusade. They check out the trailer of his organization and discover he plans to run for Mayor.

On the way back, they are attacked by Valdronya. He clings to the top of the car and reaches in through the skylight. Daphne tears off a piece of fabric from his sleeve, and Velma forces him off the car by running through a very low tunnel.

Back at the festival, Poubelle enters with a gang of "vampire hunters" deputized by the Sheriff, who will also enforce a dusk-to-dawn curfew as Poubelle wanted. This angers Rutland, but there's nothing she can do about it.

Shaggy and Scooby are wandering around the fairgrounds, and end up running into Bram and his fellow actors, who are acting kinda strange. Scooby and Shaggy try to defuse the ensuing situation when Valdronya attacks them again. They run, and Shaggy gets grazed by a wooden stake Valdronya throws, which he thinks is a vampire bite. They both end up covered with ketchup, and they get spotted by Poubelle, who declares they are both vampires, with Scooby a shape-shifter who has taken the form of a dog. Poubelle and his mob chase them into the swamp.

Shaggy thinks the "bite" means he is turning into a vampire, and he tries to get Scooby to leave, but Scooby won't. They sing a song about sticking together, which turns into a big ensemble piece as the scene cuts back and forth to other locations.

Early the next day, after spending the night in a hollow tree, Scooby and Shaggy run into assorted swamp creatures and seek refuge in a cabin belonging to "Tulie's boat rentals." They meet "Tulie" who says it isn't his real name. He was an inventor whose prototype flying shoes were stolen by a vampire a couple of weeks ago, and it has made him a little crazy. He offers them gumbo, which they eat, until he reveals the secret ingredient: leeches. They flee his cabin in one of the old rental boats.

Meanwhile, the rest of the gang talks with Van Helsing in his home. They now doubt the vampire is real, because the fabric from the sleeve is modern material. Van Helsing explains that the vampire coffin was opened when it first arrived and the body was re-dressed because the old fabric was in bad shape. He shows them a box with old material he says came from the original garments.

Daphne decides to go to question the Fangenschanz troupe. Fred is jealous and asks if she wants help. She says she knows how to handle them. It turns out she is wrong. After Bram sings to her about becoming immortal, he and his troupe kidnap her to become the bride of the vampire.

Back at the house, the others find out from Van Helsing that if Valdronya marries and steals the soul of a woman who is beautiful and pure of heart his powers will become much greater. The marriage must take place that night. Just then, Fred gets a text message from Daphne that she has been kidnapped by the actors and they realize that she has been chosen as the vampire bride.

Fred arms himself with a stake-shooting gun, and they all head to the swamp, to find and stop the ceremony from taking place. When they get close, a pair of monstrous hands emerge from the reeds and drag Van Helsing away. He shouts to them to go on and save themselves. Shaggy and Scooby show up from the swamp and are brought up-to-date about stopping the wedding.

The actors have tied Daphne by the hands between two trees, and they tell her they expect to be rewarded with vampiric immortality if they give her to Valdronya as his bride. They put the vampire wedding jewels on her and sing to Valdronya to appear to claim her. The monster does, and with a swirl of green mist he sends the actors to sleep, telling them that when they awake they will be immortal. Daphne also succumbs to the mist and in a trance she agrees to the wedding.

Shaggy and Scooby create a distraction with a camera and get Valdronya to chase them, while Velma sneaks in to untie Daphne. Valdronya gives chase, first shooting balls of fire and then trying to gas them all into submission. But Shaggy accidentally turns on the propelling fan on the boat and the mist is blown away. Fred shoots a net and then stakes, pinning the monster upside-down against a tree.

They unmask Valdronya, revealing Van Helsing. He wanted to stage a vampire wedding to create his own new tourist attraction, and to sell more books. He used a combination of the stolen rocket shoes, knockout gas, and holographic projections to create the monster effects. The hands that dragged him away were just a machine he prepared in advance. The actors were duped into thinking he was a real vampire who could grant them immortality, so they helped him.

The Sheriff arrests Van Helsing and the actors. Bram makes an appeal to go on a date with Daphne after he gets out of prison. She coldly rejects the idea because she never dates actors.

The gang reprises their song as they get into the Mystery Machine to go on a different vacation which they hope will not include any more monsters. 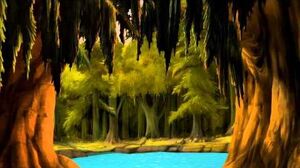 Scooby-Doo! Music of the Vampire - Trailer 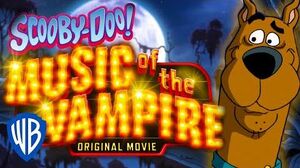