Scoobypedia
Register
Don't have an account?
Sign In
Advertisement
in: Animated films, Direct-to-video films, Scooby-Doo! Legend of the Phantosaur

This article is about the film. For other uses, see Scooby-Doo! Legend of the Phantosaur (disambiguation).

Scooby-Doo! Legend of the Phantosaur is the sixteenth in a series of direct-to-video films based upon Hanna-Barbera's Scooby-Doo Saturday morning cartoons. It was released on DVD and Blu-ray on September 6, 2011.

Mystery Inc.'s visit to a spa is disturbed by a "Phantosaur". Will Shaggy's hypnosis induced bravery save the day?

The gang brought Shaggy to the hospital, as he was screaming non-stop after their last case, which was almost three hours, much to the doctor's amazement. After the doctor finally got Shaggy to stop, the gang began to explain how it happened: They were investigating an old mansion haunted by Phantom naval officers. Shaggy and Scooby went to look in the basement, where they see the phantoms, and run back upstairs. Shaggy was hiding in a wardrobe, but found many monster puppets. Meanwhile, the phantoms were really puppets on strings, found out when the culprits were pulled down and revealed to be Blair and Culhane who wanted to scare people away so they could buy the mansion for nothing. Shaggy was then taken by the ambulance, screaming.

After getting X-rays, the doctor believed that Shaggy is suffering from acute-threat-avoidance-hypertrophy disorder, which is a very rare form of overreaction to fear that affects fewer in one in ten million, which is why Shaggy has to give up anything frightening, meaning no more mystery-solving shenanigans, much to the gang's surprise. Although Shaggy takes it pretty well and leaves to find a cafeteria.

Meeting at Shakey Joe's coffee shop, Shaggy soon realizes how bored he is if they're not solving mysteries. Fred joins the gang, disappointed because he's failing science; his teacher didn't like his project which was a booby-trap. If he doesn't come up with an extra-credit project he won't graduate. Daphne gets an idea involving her Uncle Ted's investment in a new resort in La Serena, where there's an paleontological dig in town. Ted could get them a room at the spa, where Fred could volunteer to help the dig, and Shaggy could go because the brochure says La Serena is the least haunted town in America. Shaggy wasn't sure at first, until Velma said they have three different all-you-can-eat restaurants.

The gang travel to a remote town to stay at the La Serena Spa. There, they meet Mr. Hubley who works there. Shaggy asks if there is anything to eat, and Hubley says no, but there is a barbecue in town.

The gang goes to the barbeque, and all but Shaggy and Scooby-Doo go off to see the paleontological dig of Professor Svankmajer. Shaggy and Scooby are too full to walk right away. When they set out, a lizard steals a biscuit from them, causing Scooby to go after it. He meets the Phantosaur and runs away, he showed Shaggy where he saw it but it vanished..

Meanwhile, Professor Svankmajer shows the rest of the gang over the dig, and Velma meets Svankmajer's student, Winsor. She instantly sees him as a soul mate and they plan to go out on a date. Just when Shaggy feels very relaxed the Phantosaur shows up and gives chase to him and Scooby, they narrowly escape but Shaggy passes out of fear.

Back at the spa, Shaggy is in terrible shape after his fright. Mr. Hubley helps with aromatherapy, assisted by Scooby-Doo adding a Scooby Snack to the aromas. Shaggy becomes more calm, but freaks out again when Mr. Hubley tells them the legend of the Phantosaur. The legend says the Phantosaur was summoned by Native Americans to drive out Spanish conquistadors, but it turned on them instead.

Hubley has an advanced hypnosis machine with a hologram projector witch he uses to hypnotize Shaggy to become fearless and unstoppable when he hears the word "bad," and to switch back to normal when he hears it again. Then he orders Shaggy to forget everything. Unfortunately, Hubley himself was affected by the hypnosis and he couldn't remember the key word for Shaggy.

Daphne, Fred, and Velma go back to the dig to look for clues. Velma is so lovestruck that she's not much use. She misses an obvious clue about many footprints going to a part of the cave where Winsor says they never go.

Meanwhile, Scooby and Shaggy go to an all-you-can-eat restaurant and start to eat it out of business. Then a biker gang comes in. Shaggy accidentally squirts the contents of a hot-dog bun on one of the bikers, who grabs him. Friz, the biker, says something about how he's going to get hurt "bad." Suddenly, Shaggy is fearless. He knocks all of them out. Then the gang leader, Tex, arrives and challenges him to a motorcycle race on Dead Man's curve. Shaggy confidently accepts, even though he's never ridden a motorcycle before. As Tex leaves, he says he won't kill Shaggy "bad." Suddenly back to normal, Shaggy is terrified of the challenge he just accepted.

That night, Daphne decides to give him motorcycling lessons, because she drove a motorcycle when she was five. Shaggy and Tex have a motorcycle race, and Shaggy hears "bad" just in time and almost wins, until a Phantosaur shows up and he thinks in his mind that the monster must think it's so "bad," which is enough to make him cowardly again and get chased.

Eventually, they figure out that there were two phantosaurs and they were robots. The culprits were two mining company employees who wanted the silver they found in the area, which they couldn't get to because of the paleontologists.

Then, they get attacked by more dinosaurs and a fire-breathing Phantosaur, and learn that it was Professor Svankmajer and Winsor, much to Velma's dismay. They had found a complete dinosaur encased in quartz crystal, a beautiful and priceless find, and they wanted to keep it for themselves. They wanted to scare everyone off so they could dig it out and take it away. They disguised four other graduate students in velociraptor costumes, and created the larger fire-breathing Phantosaur with an advanced holographic projector (stolen from Hubley's hypnotism room), and paint-stripper devices that blasted super-heated air for the fire effects.

While they are underground, the dynamite charges Svankmajer set to blast free the dinosaur crystal go off (because Daphne left a paint-stripper on and the heat lit the fuses). Shaggy's hypnotic bravery comes in again, until Daphne praises him that he's "not bad." Shaggy has to complete the rest of the escape on sheer guts, and with some help from his new biker friends. Svankmajer and Winsor are arrested, but Velma says she will date Winsor again when he gets out of jail. Later Fred calls his science teacher and tells him about the dig to where his teacher raises his grade to a C with the gang wondering what should he do in order to get an A in the class.

They then go back to La Serena Spa and Mr. Hubley tries to un-hypnotize Shaggy, accidentally turning the entire gang into Shaggys. The gang drive away in the "Mustard" Machine, debating who is the real Shaggy.

The van has somehow been covered in giant Shaggy hair, which the GPS complains about.

The working title was Scooby-Doo! Attack of the Phantosaur.[1] 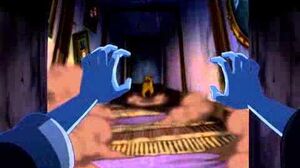 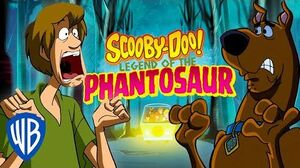 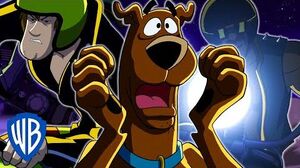 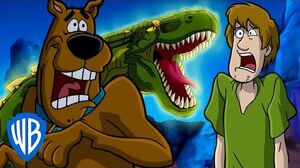 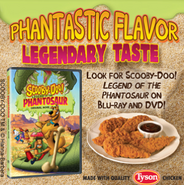