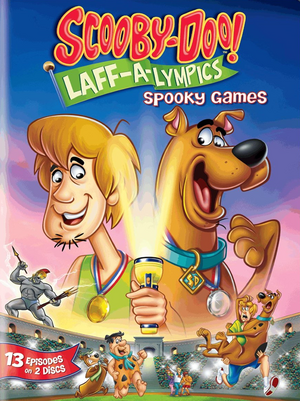 IT’S ALL SPORTS AND SHENANIGANS IN THIS LAFF-PACKED COLLECTION!

Let the fun and games begin! Scooby-Doo! and the gang are off to compete at the World Invitational Games in this all-new 23-minute episode Spooky Games! And there’s no shortage of spookiness – the gang’s fun gets sidetracked when a 1,000-year-old statue comes to life and threatens the entire event! Will the games go on? The high jinks continue with world-hopping of Hanna-Barbera’s competitive classic Scooby’s All-Star Laff-A-Lympics! Three teams enter, and all the fun breaks loose! Grab a seat as the Scooby Doobies, the Yogi Yahooeys and the Really Rottens get ready, get set, and get into more eccentric events! From bullfights and mountain climbing, roller skating to leprechaun hunting, trek the globe to catch all of the animated antics! Special guest stars abound, including Fred Flintstone and Barney Rubble. This collection is sure to take the gold!

UK version
Add a photo to this gallery