This article is about the film. For other uses, see Scooby-Doo! Frankencreepy (disambiguation).

Scooby-Doo! Frankencreepy is the twenty-second film in a series of direct-to-video films based upon Hanna-Barbera's Scooby-Doo Saturday morning cartoons. It was made available for digital download on August 5, 2014, and later for DVD and Blu-ray on August 19.[1]

Velma inherits her great-great uncle's mansion, which holds dark secrets she's tried to keep hidden for years. Going to Transylvania, Pennsylvania, Velma sets out to clear her family's name, while the gang's friendship and their biggest phobias are put to the test.

After the Ghost Bear was defeated, Daphne is hosting a web show where various fans and her friends web chat with her (along with reviewing old cases) when Cuthbert Crawley, a lawyer for Velma's family, interrupts to deliver a message to Velma. It seems she's inherited her great-great uncle's estate in Transylvania (a small town in Pennsylvania, rather than the infamous Romanian region). Velma vehemently turns the offer down which puzzles the gang. Mr. Crawley understands, revealing a curse. If anyone gets too close to the Baron Basil estate, then what they love the most will be destroyed.

A mysterious, masked figure plants a bomb in the engine block of the Mystery Machine and Fred manages to hear the ticking in time to save his friends. After the Mystery Machine explodes, the mysterious masked character reveals himself before disappearing and Crawley claims it's the ghost of the Baron, Velma's old ancestor. A message remains in the rubble of the van, warning the gang to stay away from Transylvania. Fred refuses to be scared away, instead declaring they're going to find the person responsible for destroying his beloved van because this time "it's personal".

The gang take a train to Transylvania and Velma reveals why she doesn't want her inheritance. She says that her real last name is Von Dinkenstein, which was changed and Americanized when her ancestors arrived at Ellis Island. Her great-great uncle was Baron Von Dinkenstein, who was said to have created a monster that inspired famous novelist Mary Shelley to write her novel Frankenstein. This is also why Velma started solving mysteries centered around the paranormal; she wants to get away from her family name and supposed supernatural curse. Suddenly, the train starts to pick up speed and the end cars start falling overboard during sharp turns. Fred and the gang quickly heard the train passengers to the front of the train, and Shaggy and Scooby look for the conductor, only to find the Masked Baron's ghost, who reiterates his curse over the gang before he tears off the train's control panel and gets away. The gang manage to slow down the train as they near their destination and detach the driver's car, sending it careening into the town's clock tower. The townspeople waiting at the train station are less than pleased, especially when they discover Velma is a Von Dinkenstein, and blame her family's curse for their poor tourism. Iago, a hunchbacked servant of Castle Von Dinkenstein arrives to take the gang to Velma's family castle and that's where they meet Mrs Vanders, the stern-faced housekeeper.

After a brief tour, Mrs Vanders shows them the Baron's laboratory, complete with hybrid animal monster encased in ice (a monster that Daphne dubs "Frankencreep"). Velma is sure the monster in the ice is fake and thinks she can prove it by following the Baron's notes to recreating the circumstances of its reanimation. She demands the gang leave her to her work and when they leave, Mrs Vanders shows Velma an electro wheel machine which hypnotizes her. Shaggy complains he's hungry and Mrs Vanders offers them a local jellied pigs feet dish that Daphne manages to swallow a bite of (with some difficulty). They go down to the torch festival in search of better food and are met with some hostility. Shaggy and Scooby manage to earn some admiration from the townspeople by winning their eating contest and getting themselves a trophy and some new local-style clothes. Daphne's own search for clothes has her at a gypsy girl's clothing store where she's informed that she needs a large dress (due to weight gain) and her hair has become frizzy (due to air moisture). As for Fred, he can't seem to get over the loss of his van with everything at the festival reminding him of the Mystery Machine. He runs into Shaggy and Scooby who have offended the townspeople when they refused to eat some congratulatory sausage because they were full. Daphne also finds them but, before they are surrounded by a torch-happy mob, Iago arrives and tells them that Velma has gone insane.

When they return, they find a completely different Velma with tall, wild hair, a slinky, vampy outfit and a maniacal gleam in her eye. She reveals that she can bring the Frankencreep monster back to life, much to everyone's shock. Shaggy insists she's the most against supernatural magic but she counters that what she's doing is not magic, it's science. As she commands Iago to set the events in motion, the townspeople gather outside the castle and demand to be let in. Velma refuses so they start ramming against the door. They manage to bust inside in time to see the monster revived, to the shock of everyone (including Velma). Shaggy is also surprised to realize he's not afraid of the monster, and neither is Scooby. The monster starts going on a rampage and chases after the townspeople. Velma drives Daphne away crying with a cold insult and Fred leaves, downcast, feeling that he can't help trap the monster without the gadgets of the Mystery Machine. That leaves a fearless Shaggy and Scooby to chase down the monster (complete with a musical montage where they don't back down from scary things). Velma ultimately takes the monster down with a dart and also takes out Shaggy and Scooby.

Daphne ends up in a hall of mirrors and upon seeing she has become morbidly obese and looks ugly, breaks one, revealing a secret passage and the mysterious masked Baron who blew up their van. Fred also makes a discovery when he ends up in large, old tool storage room. He hears Daphne scream for help and rushes to her aid. Shaggy and Scooby regain consciousness and find themselves strapped to a table beside the strapped monster. Velma reveals she's planning to remove Shaggy and Scooby's brains to put them in the monster. A stray monster tentacle manages to rip off Shaggy and Scooby's new outfits, turning them back to their old hungry and scared selves. Meanwhile, Daphne tries to get away from the Masked Baron when Fred appears, decked out in homemade weaponry (including broom and a fireplace bellows). The Masked Baron mocks his destroyed van and Daphne urges him to fight back and avenge the van. Fred does, managing to snag the Baron's cape before he fled. After sharing an emotional moment (and an embrace) Daphne notices that the Baron's cape is made of a synthetic cloth instead of an older, authentic silk. That's when the tunnels start caving in, highlighted by the Baron's laughter. Fred and Daphne try to dig themselves out but feel light headed and woozy. When Daphne rips her dress sleeve, she discovers it's actually an inflatable suit and uses the air inside to keep herself and Fred ventilated.

With their fear and appetite returned, Shaggy and Scooby chew through their leather bindings and run away. Velma quickly frees the Frankencreep and commands it to bring them back. The monster does so but hits the lever of the machine that hypnotized Velma, causing it to spin in the opposite direction and bringing her back to normal. After trying to lose the monster in the library, Shaggy and Scooby find a secret passageway and run into an escaping Fred and Daphne. The four of them are quickly found by Velma and Iago who explain that a natural gas deposit beneath the castle is seeping inside (which is why Fred and Daphne got light headed in the cave). Fred whistles for a horse and wagon, decked out like the Mystery Machine, and they make their getaway just as the gas makes it to an open flame. The gas-filled castle explodes in view of the entire town. They think Velma and her friends are dead and celebrate the end of the Van Dinkenstein curse. Later on, apparitions of the gang appear before the mayor, the inspector, the gypsy girl, and Mrs Vanders, scaring them and driving them to the express train. They end up trapped inside the train car and the gang reveals themselves to be alive and well.

Just as the mystery seems to be wrapped up, the Frankencreep monster reappears but it's revealed to be a robot with Iago inside. What's more, Iago reveals he's actually an undercover agent named Shmidlap from the Department of Defense. Apparently the monster was an exoskeleton created by the army which was stolen from their research labs and traced it to Transylvania. It's revealed that the burgermeister (mayor), the inspector, the gypsy, and the housekeeper conspired together taking turns inside the machine. The inspector is initially discovered to be Cuthbert Crawley, Velma's family lawyer, but even that identity was faked as he was actually Cuthbert Crawls (the partner of Cosgood Creeps). The burgermeister is revealed to be C.L. Magnus (who posed as Redbeard's ghost). The gypsy is shown to be Lila (a singer in the Mamba Wamba case). And the housekeeper, Mrs. Vanders, is unmasked as Mama Mione (a criminal smuggler who posed as Old Iron Face). The four criminals from old past cases got together in prison and planned on getting revenge for their incarceration. When they discovered the history of Velma's ancestry, they bought the Von Dinkenstein castle and blended in with the townspeople. Velma also explains that Daphne puffed up due to her shellfish allergy and Shaggy and Scooby lost their appetite and fear because of acupuncture needles in their new clothes that inhibited those parts of the brain. With the pieces put together, Velma realizes that this time it was not about money, it was about them.

Before getting hauled away, Velma points out to the villains (who were captured for monetary reasons the first time around) that because of the natural gas line, they could've made a huge fortune by simply selling the castle-property. The villains are shocked to hear this--they were so focused on getting revenge that they didn't even realize that and are left grumbling as they're arrested once again. The Scooby gang laugh at Shaggy's joke of the villains being greedy for revenge instead of money.

The town is in a more jovial mood, cheering the gang. Velma giving them her family's castle, and the natural gas beneath, is the main reason they're happy. Agent Shmidlap gifts Fred with a brand new Mystery Machine as a thanks for capturing the villains and getting back their mech suit. He confides in them that the new van has a few extra features.

As the gang's driving off, Daphne wonders how Velma knew that the curse wasn't real--Velma makes a speech about what she and the rest of the gang lost over the course of the movie wasn't really that important: what they really value most is each other and their friendship. The rest of the gang agrees to this and Fred notices a new button on his dashboard. He presses it, revealing some jet turbines that launch the gang into the air and have them flying, much to their surprise.

One of the video web chatters has already viewed the case online, and points out some of its inaccuracies. This gets the attention of the DOD, who take him away and cut off his computer broadcast.

The following credits are how they are seen on-screen (or as close as possible). 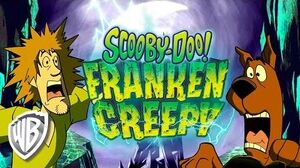 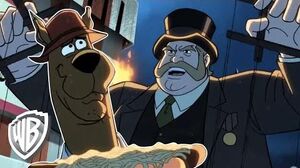 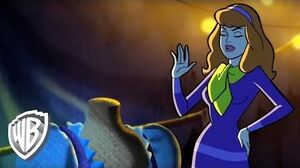 Scooby-Doo! FrankenCreepy You're An Acht 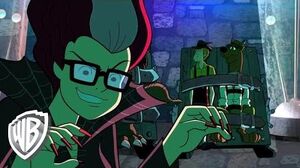 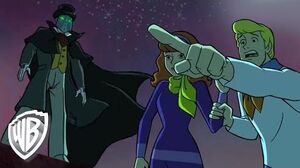 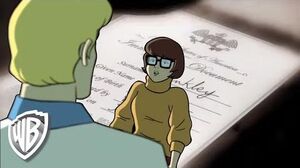 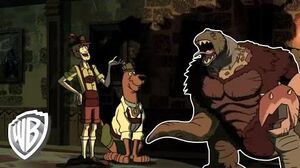 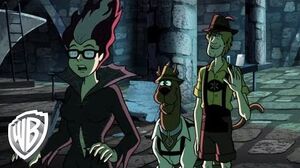 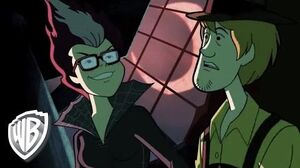 Scooby-Doo! Frankencreepy It Will Live 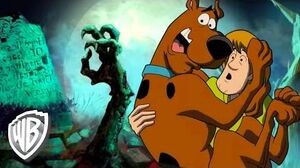