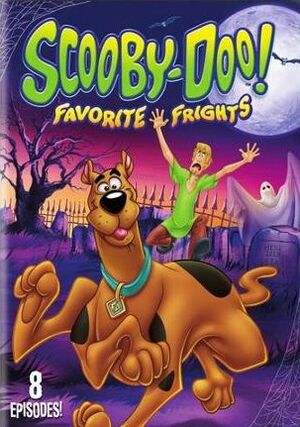 Scooby-Doo! Favorite Frights is a single disc DVD, with eight episodes from various Scooby-Doo series. The episodes feature the monsters included in the first wave of LEGO Scooby-Doo! playsets. It was released by Warner Home Video first as a Walmart exclusive on September 15, 2015, then a "wide" release on October 13, 2015.

Get ready for kooky, spooky Scooby-Doo fun and mystery with this all-time fan-favorite episodes! You'll be up to your eyeballs in laughs, frights and fun with these timeless canine capers. See the pilot episode that launched Scooby-Doo and the Mystery Inc. gang in What a Night for a Knight. It's a monster mash-up when the gang crosses Dracula, Frankenstein's Monster and a werewolf in A Gaggle of Galloping Ghosts. Fear not, there's monstrous good times galore in all eight of these Scooby-Doo classics. So grab your favorite Scooby Snack and get on the case with Scooby-Dooby-Doo!

Retrieved from "https://scoobydoo.fandom.com/wiki/Scooby-Doo!_Favorite_Frights?oldid=284966"
Community content is available under CC-BY-SA unless otherwise noted.