Scooby-Doo! Camp Scare is the fifteenth in a series of direct-to-video films based upon Hanna-Barbera's Scooby-Doo Saturday morning cartoons. It was released on DVD on September 14, 2010.

The gang sign up as camp counselors at Camp Little Moose, a place where the creatures of scary camp stories seem to come to life.

At Camp Little Moose, Counselor Burt tells a story to the kids around a campfire, 50 years ago, there was a mean counselor named Jerry McCeety. One day, the kids played a prank by putting a snake in his day pack and when he was out hiding, he reached for his trail mix and grabbed the snake. He fell down a cliff and banged his head on every rock. Legend says that his head trauma drove him insane and they call him the Woodsman. Suddenly, a shadow appears in the trees scaring the kids, but it was just a prank by another counselor named Darryl. After sending everyone back to their cabins, Darryl hears some pounding nearby and finds the door to the boathouse banging on the wall. But when he turns around, he finds the actual Woodsman. Burt sees him running for his life as as the boathouse explodes. A nearby message reads "Get Out."

Scooby-Doo and the gang travel to Camp Little Moose, Fred's old summer camp, to vacation and serve as camp counselors. But when they arrive they find the camp empty save for Burt, the head counselor, and the local forest ranger, Ranger Knudsen. They discover that one of the camp's old legends, the Woodsman, has come to life and scared the kids away. Ranger Knudsen suggests Burt close the camp before leaving. Burt is about the heed to the Rangers advise when three kids, Luke, Trudy, and Deacon, arrive at the camp. Fred convinces Burt to keep the camp open until the Mystery Inc. gang discovers what's going on.

That evening, Scooby goes out into the woods to find some more firewood but is soon attacked by the Woodsman. When he returns to the kitchen, Burt shows up with firewood and the Woodsman has vanished.

The next day, everyone decides to spend the day at Big Moose Lake, home of the rich and modern Camp Big Moose, where the gang enjoys their time at the lake. Daphne strips into her purple bikini and Velma strips into her white swimsuit. As the sun sets, Scooby goes scuba-diving and finds an underwater building. As he gets closer, he's attacked by the Fishman, another camp legend. The others are pushed off the lake and landed safely back at Camp Little Moose.

That night, Jessica, Camp Big Moose's head counselor, asks the gang if Camp Little Moose is pulling a prank on Camp Big Moose, explaining that an RV and some sonar equipment are missing from the camp. They're suddenly attacked by the Woodsman and barely save Jessica from falling off a bridge as the Woodsman disappears again.

The next day, Jessica brings them to Camp Big Moose and shows them where the RV disappeared. The gang wonders what purpose the equipment would serve for the Woodsman or the Fishman. Velma uses the RV's tracking device to locate it at Shadow Canyon where the Specter, another camp legend, is said to reside. Everyone splits up; Fred, Daphne, Jessica, and Luke go investigate the building in Big Moose Lake, and Velma, Burt and Trudy head to Shadow Canyon, while Shaggy and Scooby stay at Camp Big Moose with Deacon.

After being chased by the Fishman, Fred, and the others discover a whole town in the Lake, as well as some dynamite hidden in a cavern.

While helping themselves with food, Shaggy, Scooby, and Deacon are chased out of Big Moose and ended up in Shadow Canyon where they crashed into the RV which has been painted to look like the canyon wall. They find the sonar equipment is being used to scan the lake. Then, they are chased by the Specter.

Everyone meets back at Camp Little Moose to go over what they found. Deacon decides he has had enough and wants to go back to Camp Big Moose, and Jessica drives him.

The Mystery Inc. gang want to know more about the underwater town, so they ask a local shop owner about it. He explains that the town is called Moose Creek, which had been a mining town until it was deserted before the creation of the dam and Big Moose Lake. But more importantly, the treasure of a notorious gangster named Ricky LaRue is said to be buried there. When Ricky died in prison, his last words were that the sun hitting the town on the Summer Solstice would reveal the location of the treasure. LaRue's cellmate, another gangster named Babyface Boretti, not only knew the secret to finding the treasure but had recently escaped from prison. The gang reasons that dynamite will be used to destroy the dam and reveal Moose Creek in order for the monsters to find the treasure, as the next day is the Summer Solstice, though doing so would flood Camp Little Moose. The gang returns to the camp to find that the Woodsman has laid waste to it, but Burt, Luke, and Trudy are safe and stayed hidden from the monster. The gang realize that the Woodsman likely attacked the camp to ensure it was empty and, believing it to be empty, would probably destroy the Dam. The dam then explodes, and everyone narrowly escapes in the Mystery Machine with Scooby driving.

Everyone goes into the now revealed town of Moose Creek to explore where they find Jessica, who explains that she had been following Deacon. They are all attacked by the Woodsman, who chases Fred, Jessica, and Luke; the rest are found by Deacon, who stuns them by locking them up in the town's old jail and revealing himself to be Babyface Boretti. Fred, Jessica, and Luke escape the Woodsman when he falls from the church steeple, while Shaggy shakes the jail cell door, ratting the bars loose. Everyone meets up again, just as the steeple points a beam of light to a spot on the ground. Scooby digs to find the treasure, but they are soon attacked by the Fishman. After a long chase, the Fishman is caught and revealed to be Ranger Knudsen, who is also the Woodsman and the Specter. Scooby then captures Babyface Boretti, who tries to escape with the treasure.

Velma explains that Babyface and Knudsen teamed up to scare away the kids at Camp Little Moose, explode the dam, and take the treasure. Babyface posed as Deacon to try to convince everyone to leave. The two also stole the equipment from Camp Big Moose in order to search the lake. Boretti and Knudsen are arrested.

Burt and Jessica merge the two camps to form Camp Little Big Moose, and the Mystery Inc. gang serve the remainder of the summer as camp counselors there. The gang sits around the campfire with all the campers, while Burt tells a scary story of The Woodsman, who then emerges from the shadows. But is only Scooby-Doo playing a joke on them. 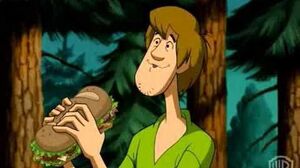 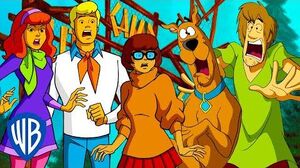