Scooby-Doo! Adventures: The Mystery Map is a direct-to-video film, inspired by the Muppets franchise, with the designs of the gang and other comedic elements being based on the A Pup Named Scooby-Doo TV series. It was originally released as a Walmart exclusive DVD on July 23, 2013, before being given a "wide" release on February 14, 2014.

The gang finds a treasure map while ordering a pizza, which leads them to searching for Gnarlybeard's hidden treasure, while also coming across Gnarlybeard himself and the Phantom Parrot.

After Scooby-Doo accidentally stumbles on a treasure map while eating the pizza, he and Shaggy had ordered, the gang are attacked by Ye Phantom Parrot while hanging out in their tree house. This unprovoked attack sends them into solving the mystery behind the map and they beginning to follow Ye Phantom Parrot to a lighthouse where along the way they find clues to who is behind the ghost.

The gang is back in their tree house watching TV where there is a news report on their capture of Stu Stukowski, and begins discussing about the map, which the news reporter confirms is curse. Velma, who is on the computer discovers that part of the map is missing and realizes that earlier on Scooby had unintentionally eaten the missing piece when he found it in his pizza. Using an X-ray machine to scan the missing piece from Scooby's stomach and restore it to the map, the gang use it to find the hidden treasure of Gnarlybeard.

Once they reach the X the gang split up while Shaggy and Scooby dig up at the spot where they discover another X this time glowing. The X triggers a spring that shoots Shaggy and Scooby right onto the ghost ship of none other then the ghost of Gnarlybeard himself. Gnarlybeard takes Shaggy and Scooby hostage and makes them swab the deck, while Velma, Daphne and Fred follow after in one of Daphne's dad's planes he just happens to have conveniently placed where they could find it (according to Daphne he has planes parked in various spots around the globe.)

Shaggy and Scooby finally escape from Gnarlybeard and come to rest on the island the ship was heading for. They soon meet up with Velma, Daphne and Fred and they continue to look for the treasure. But when they reach the spot where the treasure is hidden, Gnarlybeard has already began digging up the treasure, Velma then figures out who the culprit is and the gang set a trap to capture him but when the plan is moved into action Shaggy and Scooby are accidentally caught instead and Gnarlybeard continues to pursue Velma, Daphne and Fred. While stuck in the net of their trap, Shaggy and Scooby began throwing coconuts at Gnarlybeard and knock him unconscious. With Gnarlybeard captured the gang reveal that it was Shirley, Stu's sister behind the mask. The gang then open the treasure chest to discover that it was nothing more than bottles of shampoo for Gnarlybeard's beard of which he never would have used as revealed earlier in the film that he liked to have his beard dirty.

The gang return to the tree house, and Shaggy and Scooby are taking a bath with the bottles of shampoo they had recovered from the chest. 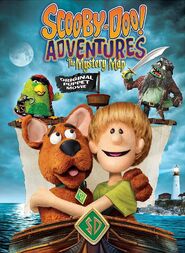