Scooby-Doo! Abracadabra-Doo is the fourteenth in a series of direct-to-video films based upon Hanna-Barbera's Scooby-Doo Saturday morning cartoons. It was released on DVD on February 16, 2010.

The gang go on a trip to check on Madelyn, Velma's younger sister, at Whirlen Merlin's Academy of Magic, where apparently there has been some trouble of a giant griffin scaring all the students away.

After wrapping up their latest mystery of the chemical creep, Velma gets a call from her mother asking that she check on her younger sister Madelyn, who attends a college for magicians. The gang head off to the Whirlen Merlin Magic Academy, located in an old Irish castle. They meet the owner, Whirlen Merlin, along with his brother Marlen, who acts as cook and butler, and Crystal, Whirlen's former stage assistant. Fred is smitten, to Daphne's irritation. The gang learns that a giant gryphon has been scaring away the students and staff.

After dinner, Velma, Daphne, and Fred are talking in the hall, when Daphne comments on his attraction to Crystal. Fred explains that she is so graceful, then he and Velma make fun of Daphne's klutziness.

Later that evening, Madelyn, who has had a crush on Shaggy for years, takes him on a romantic walk to in the gardens and show him an ancient sun-dia. Madelyn explains that the gryphon was meant to protect the school, but then the gryphon chases them from the garden. A student takes a picture of the gryphon, which appears on the morning newspaper. The rest of the students leave, so the gang starts taking classes themselves. Meanwhile, Calvin Curdles, a powerful vegetable ice-cream guru, continually offers to buy Whirlen's castle from him. The gang promises to investigate to see if Curdles is behind the Gryphon, so he tells Amos to call if he hears anything new.

Velma finds Daphne practicing ballet so she can be more graceful and capture Fred's attention. The two then stumble on a secret passageway leading to the attic of the school, where they discover (through an old scrapbook) that Alma Rumblebuns, the school's head maid, used to date Calvin Curdles. Meanwhile, Jack and Midna discover the special effects room of the castle, where they are discovered by Ms. Rumblebuns and knock over some chemicals, creating a fog. The room is revealed as Marlen's private laboratory, where he creates holograms and puppets for Whirlen's show. Madelyn then finds a book about the ancient staff of O'Flannery, which is said to control the gryphon. The gang finds the staff in O'Flannery's grave, but are chased away by a Banshee and narrowly escape.

Afterwards, Shaggy and Madelyn sit down and talk, and Shaggy discovers that he likes Madelyn just as much. Not long after, the gryphon chases them again. As the gang runs to the castle, Shaggy and Madelyn bump into Amos and misplace the staff. When Madelyn runs outside to recover the staff, she is kidnapped by the gryphon and taken to its Roost, an ancient dilapidated tower. Meanwhile, the gang finds out that Amos has been secretly working for Calvin Curdles to try to get Whirlen to sell the castle. Amos calls Curdles to the castle while the gang goes after Madelyn, and Curdles tries to convince Whirlen to sign over the castle. Whirlen almost does so, but the gang suggests that they wait before the deal is signed, still believing that Curdles is behind the entire thing. They get into the tower with the spear, which is a key, and they rescue Madelyn. Everybody rushes outside including Curdles. The gryphon crashes to the ground, where they discover that it is a giant puppet, controlled from a blimp hidden by a fog machine run by Whirlen's brother Marlin. He had discovered that Lord O'Flannery had devises hidden in the Gryphon's Roost, hoping it would make everyone think a monster lived there. Marlin used the devices to scare trespassers away. He was also behind the banshee, which was only a hologram.

Tired of doing the work but getting none of the credit, Marlen decided to use his puppets and illusions to become a famous magician himself, but he needed money and the only way to get some was to get Whirlen to sell the castle.

So Marlin had his gryphon puppet scare everyone away. He apologizes for trying to make Whirlen fail, knowing how much the school meant to him. Not wanting to take away his dream. Whirlen forgives Marlin, and all is well. Velma reveals that Amos found Marlon rebuilding the Gryphon and told Curdles about it. Curdles reveals he wanted to buy the castle to win back Alma's heart after having left her years before in order to make something of himself. He instead got distracted by the money from his vegetable and meat ice cream cones. Alma accepts him back and they become a couple again. They also find the staff hidden in the deflated blimp. It pierced the blimp when Shaggy threw the staff at the gryphon and missed it.

The Merlin brothers decide to make Madelyn their apprentice and soon after Calvin Curdles sponsors the reopening of the Merlin Brothers' Academy of Magic, where Madelyn performs with Daphne acting as her assistant. In one of the tricks she appears in the seat next to Fred and gently teases him, causing Fred to see her in an all new light. Scooby 'tames' a lion; which is actually the real Scooby controlling a puppet Scooby, which tames the lion.

While alone, the Mystery Machine "talks to some kids": "You kids are still watching? Well, the mystery's over! Now move on with your lives! Hahahahahahahahaha...(cough) I need oil." 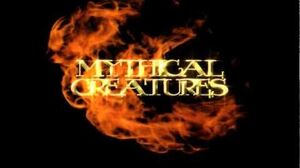 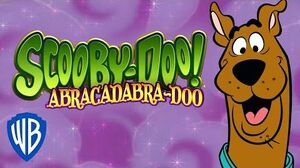