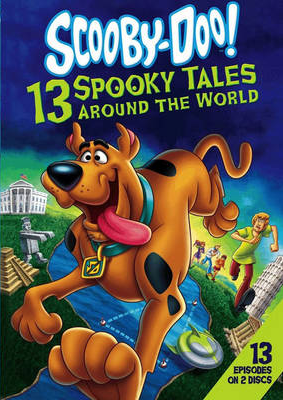 Scooby-Doo! 13 Spooky Tales Around the World is a two-disc DVD compilation of 13 world-themed episodes from various Scooby-Doo series. It was released on May 15, 2012 by Warner Home Video.

Nobody vacations like Scooby-Doo and the gang. This is arm-scare travel at its very best! And with 13 hair-raising vacation destinations on two DVDs, that’s hours of family fun. Get ready to get shipwrecked in the Bermuda Triangle with scary skeleton scuba divers and chased through the canals of Venice by the Ghostly Gondolier, who even kidnaps Daphne! Hop aboard a haunted Aztec barge, but not before Scooby-Doo wows a vengeful god with his Mexican hat dance – to say nothing of his airplane cha-cha over the headhunter-happy jungles of Brazil. Along the way you can bet the Mystery Inc. gang will get to the bottom of each mystery with plenty of “zoinks!” (the same in every language), plenty of hijinks and a whole lot of international cuisine – leaning tower of pizza anyone?

Retrieved from "https://scoobydoo.fandom.com/wiki/Scooby-Doo!_13_Spooky_Tales_Around_the_World?oldid=200733"
Community content is available under CC-BY-SA unless otherwise noted.