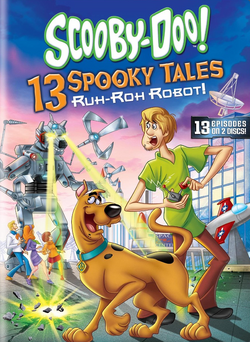 Who do you call when mysterious computerized crimes need to be solved? You call Scooby-Doo, that’s who! Scooby-Doo and the gang are back with nerves of steel in the all-new episode Scooby-Doo! Mecha Mutt Menace, plus 12 more episodes full of mechanized misadventures. From giant killer bees to dinosaurs to ghosts, Scooby-Doo and the gang investigate one spooky, strange technological terror after the other. Don’t miss everyone’s favorite crime-solving canine and his crew of daring detectives as they find out who’s smarter…man’s best friend or machine!

Main menu of the DVD.
Add a photo to this gallery