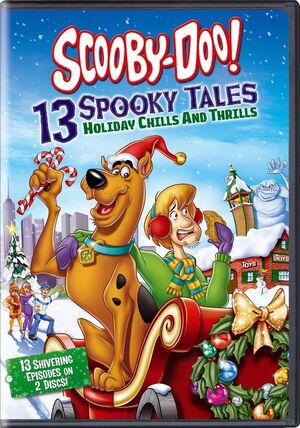 AN AVALANCHE OF FUN WITH SCOOBY-DOO!

The snow is falling, and a chill (and plenty of thrills!) is in the air – it’s wintertime with Scooby-Doo! Scooby-Doo and the gang have a merry mystery to solve in the all-new episode Scooby-Doo! Haunted Holidays! An aged-old curse is threatening the Menkle family toy store – the curse of the sinister snowman! It’s up to the Scooby-Doo! crew to unwrap this sinister plot and save the toy store. Can they stop the menacing snowman before it’s too late?! Then, bundle up 12 more wintry episodes featuring your favorite kooky K-9 detective. From snow beasts to snow ghosts, it’s chills and thrills indeed in this blizzard of fun for the whole family!

Back Cover
Add a photo to this gallery