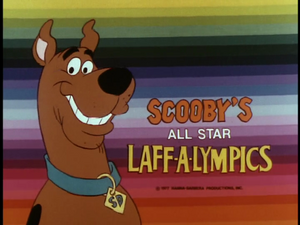 Scooby's All Star Laff-A-Lympics is a two-hour Saturday morning animated series produced by Hanna-Barbera Productions that aired from September 10, 1977 to September 2, 1978 on ABC. It was also the first such 120-minute Saturday morning cartoon in television network history, and contained the following segments:

For the 1978–1979 season it was reduced to 90 minutes and re-titled Scooby's All-Stars, removing The Blue Falcon & Dynomutt, which had been cancelled.