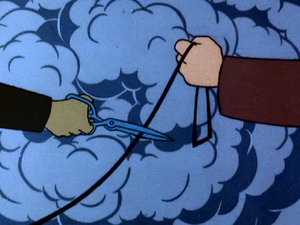 They consist of a pair of metal blades pivoted so that the sharpened edges slide against each other when the handles (bows) opposite to the pivot are closed.

Shaggy Rogers used a pair to cut in half the extra long straw Scooby-Doo was using to suck up the former's glass of jumbo pink lemonade.[1]

As the fumes from Mike's van hid him, he cut Scooby's leash, and dognapped him, confusing him for another Great Dane (which was the point).[2]

Shaggy cut at his t-shirt where Fred Jones was pulling onto him because the former was trying to run free of the cemetery and the werewolf mystery.

Shaggy later used a pair to cut the werewolf's head of hair while he and Scooby were disguised as barbers.[3]

Shaggy and Scooby got tied up with Buster while swinging across a gorge as the last part of the obstacle course. Buster ordered his dog, Bull, to cut the rope holding Shaggy and Scooby, but Scrappy tricked him into cutting the wrong rope and they both fell into the gorge, while the trio made it to safety. (Picnic Poopers)

Insert details here. (Beware the Beast from Below)

When helping do up the Mystery Machine in the new timeline, Scooby used scissors to cut the flower patterns out of paper.[5]

Retrieved from "https://scoobydoo.fandom.com/wiki/Scissors?oldid=365226"
Community content is available under CC-BY-SA unless otherwise noted.