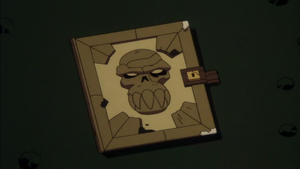 The spell book belonged to Sarah Ravencroft in the 1600's.

The book was medium-sized, and its front cover depicted the picture of a demonic skull-like face that showed long fang-like teeth. It also had a small keylock.

As stated and subsequently proved by Ben Ravencroft, Sarah Ravencroft, and Thorn, the book is useless to an ordinary human being, but not to one who is either magical or of magical descent. Ben used the book to activate his previously dormant warlock powers.

Though there seemed to be numerous spells within the book, it was also a confirmed fact that there are certain spells that only those who fulfilled certain specific requirements can effectively cast. The most prominent example shown, was the spell to banish Sarah back into oblivion: it could only be cast by a Wiccan, or, at least, a person of Wiccan descent.

In the 1600s, the Wiccans imprisoned Sarah Ravencroft in her own book of spells.

Scooby-Doo and the Witch's Ghost

Ben Ravencroft was obsessed with finding the book to clear his ancestor's name. He tricked the Scooby gang into helping him find it in Oakhaven, Massachusetts.

While there, Scooby-Doo found the latch, giving to Shaggy Rogers thinking that it's an old shoe buckle. Eventually the book was found, and they found out Ben's true intentions. He read from it, and was granted the powers of a warlock. He then released Sarah, who had been banished to a limbo realm through the book by one of its spells. The mystery gang tried to retrieve it to put her back in the book, but with no luck. Finally, Scooby-Doo got it and it circled around as each member of the gang got attacked by Sarah's spells. Thorn, being 1/16 Wiccan, read from it and it began to suck her back. As she was being sucked in, she grabbed onto Ben's leg and pulled him down with her. A burning tree branch then fell on the book, incinerating it.

Retrieved from "https://scoobydoo.fandom.com/wiki/Sarah_Ravencroft%27s_spell_book?oldid=363849"
Community content is available under CC-BY-SA unless otherwise noted.