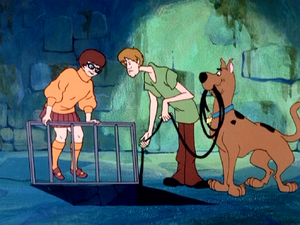 A rope is a length of thick, strong cord, made by twisting together strands of hemp, sisal, nylon, or similar material.

Rope comes in many sizes, but its telltale feature is the presence of smaller cords that have been twisted together to form the larger cord. Rope may be shades of brown if it is made from natural fibers, but it may also be a wide variety of other colors if the fibers have been dyed or it is a synthetic rope.

The gang tied up magician Bluestone the Great with rope after he was caught, but he was untied - or he untied himself - so that he could demonstrate how he created the illusion of the Phantom.[1]

After the Ghost Clown accidently hypnotized himself into thinking he was a monkey, Scooby-Doo led him out of the tent they were in using a bunch of unpeeled bananas while Shaggy kept him under control with a rope leash. Shortly thereafter, the Ghost Clown (returned to normal) was locked in an animal cage and tied up with rope.[2]

Fred Jones tied a lasso out of rope so that Shaggy and Scooby could swing across the Franken Castle moat and lower the drawbridge. The pulley system that operated the the castle's drawbridge used a combination of chain and ropes to operate the mechanism.[3]

Insert details here. (A Fright at the Opera)

When Olaf the Terrible grabbed Scrappy aboard the vikings boat, Scooby swung from a rope to rescue him. (Scooby the Barbarian)

Retrieved from "https://scoobydoo.fandom.com/wiki/Rope?oldid=364285"
Community content is available under CC-BY-SA unless otherwise noted.