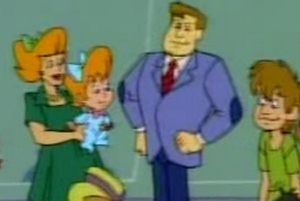 The Rogerses are a family related to Shaggy Rogers. Most of them have been or still are owners of members of the family of Great Danes, the Doos.

The males in the family tend to be Shaggy-based: relatively tall (around 6 Foot), slim or skinny in structure, brown-haired with elipsoid heads and prominent chins. Many of the men in their family are sporting a goatee as Shaggy does. The only bulky Rogers family member shown is Mr. Rogers in his prime as a police officer. The females in the family have lighter head shape with pointy chins and thin bodies, all are shown to be blondes or to have light, orangish hair.

With the exception of Mr. Rogers in his prime as a police officer, most of the Rogerses are shown to be as scaredy cats as Shaggy is - possibly a common trait, they also use hippy slang (a lot of "Like", etc.) and possess a huge apetite just as Shaggy does. They've shared a friendship with the Doo family for generations.

The Rogerses were descended from McBaggy Rogers, an English pilgrim who immigrated to America on the Mayflower, and settled in Plymouth, New England. It seemed that his descendants spread across the United States and even took part in the American Civil War, fighting for the south, Uncle Beauregard for instance.

Their connection to the supernatural started with Shaggy the First, who lived in Moonlight Castle and passed the curse of the medalion that turns its owner into a werewolf.

Shaggy was raised in Coolsville alongside Scooby, where he attended Coolsville Junior High School. His father was a police officer for the local station, while his mother took care of him and his younger sister, Sugie.

Shaggy informed his dad of Scooby running away from their home, which upset Sugie.

Shaggy took the gang to New England to visit his rich relative, Uncle Shagworthy and his newly bought Camelot castle, which was being haunted by the Ghost of Merlin and the Black Knight.

Mr. and Mrs. Rogers who are now elderly and retired, moved to New England, now living in McBaggy's original house, where his sister, Maggie, had married Wilfred.

Insert details here. (How I Spent My Winter Break)

Insert details here. (Read All About It!)