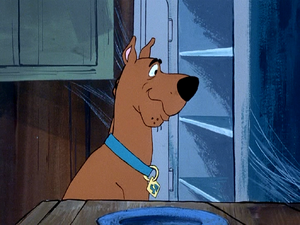 A refrigerator (colloquially fridge) is an appliance used to artificially cool food and other items.

Insert details here. (The Babysitter from Beyond)

Checking for food while investigating at the abandoned airfield, Scooby ate the chicken and ham bone he found in the fridge, without telling Shaggy (but left him an olive), who quickly realized they were clues to someone living on the base.[2]

Insert details here. (The Hairy Scare of the Devil Bear)

Insert details here. (The Ghoul, the Bat and the Ugly)

Insert details here. (The Phantom of the Mosh Pit)

Insert details here. (What Are You Afraid Of?)

Insert details here. (Scooby-Doo! and the Monster of Mexico)

Shaggy & Scooby got the kitchen of Fortescu Castle and add garlic to their milkshakes and cookies during a vampire attack.[3]

In the morning after the gang had returned home to Coolsville, for a rest from solving mysteries, Shaggy checked his and Fred Jones's fridge, which still had take-out long past its sell-by date.[4]

One morning, Shaggy and Scooby woke up ready to eat, but to their surprise, the fridge was empty of any food. Moments later, Shaggy inherited Shaggleford Manor, which had a stocked fridge.[5]

Inside of Jonathan Jacobo's Lab underneth the Coolsville Mining Town , Shaggy and Scooby-Doo find a fridge full of transformative potions. Scooby mistakes one of the potions for lemonade and drinks it, turning him into a monster with tentacles and stalk eyes. Shaggy tries to find and antidote to transform Scooby back to normal, but ended up transforming himself into a female from the neck down and Scooby turned into the Tasmanian Devil from Looney Tunes. Shaggy then becomes a muscular jock and Scooby became an Einstein-type dog. Scooby begins to use his new-found intelligence to create an antidote (as he did not want to stay smart), but Shaggy, wanting to remain strong, throws away one of the beakers Scooby is holding, causing an explosion. Fred Jones, Daphne Blake, and Velma Dinkley hear this explosion and rushed inside the lab to find Shaggy and Scooby stuck to the wall after the explosion, as well as a hole in the wall revealing the Monster Hive. Scooby still finishes the antidote and forces Shaggy to drink it, returning them to their normal selves. Shaggy comments that the experience was "almost exactly like his freshmen year at college".[6]

Shaggy and Scooby helped themselves to the contents of Fred's fridge, while sleeping over to help him with the supposed haunting of his house.[9]

Shaggy's parents had stopped him and Scooby from having a bedtime snack because he had been caught, with the gang), snooping around the Mayor's office. Fortunately, he and Scooby had a back-up fridge -- his bed -- which was also where he hid a piece of the Planispheric Disk. The Freak of Crystal Cove knew this, and came to collect it.[10]