The Planispheric Disk was a map which contained coordinates to a place of infinite treasure and the crystal sarcophagus (holding the Evil Entity). It was used by the Spanish conquistadors to navigate unknown waters, or to hide their cargo. There was one in Crystal Cove that had been divided into pieces, which were sought after by several factions (Professor Pericles, Fred Jones, Sr., and Mr. E). The disk was supposed to be a key to finding the Cursed Treasure left in or near Crystal Cove by the conquistadors.

They were six golden triangular "pizza"-shaped objects that could connect together in jigsaw-like fashion to make circular disk.

The conquistador, Fernando El Aguirre, used the disk to mark the spot where he buried a crystal sarcophagus filled with black pearls that he stole from a temple somewhere in Central America. He later broke the disk apart to make sure no one knew where it was.[2] The Spaniard had two pieces with him, but before he descended into madness, the two pieces made it into the hands of some mystery solving Franciscan monks, the Fraternitas Mysterium.[3]

The monks, feeling the dark power of the disk, wanted to destroy them or at least hide the pieces. Their mascot donkey, Porto was corrupted by the evil of the disk. The donkey blew up the area using powder kegs, hoping to keep the piece to himself. This act caused a great earthquake which caused most of the original mission settlement to slide into the sea. Friar Gabriello Serra pursued the escaping donkey, and got the stolen piece back; Porto was apparently devoured by the alligators of what would one day be Gatorsburg. Friar Serra hid the piece he recovered in a wheel of cheese. Another piece was lost in the sunken town.[3] The pieces then fell into obscurity, scattered over the globe.

Abigail Gluck managed to scour the remains of the lost city in the sea with her robots, but she died in her underwater lair before she found the lost piece.[4]

The Darrow family also found one. But consumed with greed, they constantly fought over it. The youngest member of the family, Danny, got the piece away from the rest of his family on a Halloween night, seventy five years ago, just as an earthquake struck that swallowed up their home underground. Danny's family spent the rest of their lives fighting over it until only Danny himself was left.[5]

The original Mystery Incorporated (with Professor Pericles) investigated the former Darrow Mansion, but left when they couldn't find anything.[5] They found an old scroll with a picture of the disk in the Old Spanish Church, and with advice from the pre-Mayor Fred Jones, Sr., they found one of the pieces when they went back there.[6] Unfortunately, Pericles betrayed them by making a deal with Jones Senior (who also wanted to find the Planispheric Disk), who stole it from the kids as the Freak of Crystal Cove, then forced them out of town with fabricated documents that would could get them and their families into trouble.[6][7] However, Jones Senior double-crossed Pericles, taking the piece for himself (scarring his eye, and leaving him to be taken to the Crystal Cove Animal Asylum for the Criminally Insane).[7]

The legend of the disc was heard by the current Mystery Inc., so they also entered the former Darrow Mansion, being successful in gaining the piece after talking to Danny Darrow.[5]

The next piece was in Mayor Jones's safe, which Professor Pericles managed to steal for his own gain.[8]

The third piece was discovered by Hot Dog Water and Velma Dinkley inside Baba Yaga's house, which they bought from the Russians as agents of Mr. E.[9] The fourth piece was found inside the wheel of cheese the monk hid it in, which wound up in a traveling side show.[10] The fifth piece was found on the original Spanish ship and was guarded by many traps. Mystery Inc. managed to get through and gain the piece, after it was briefly stolen by Dark Lilith.[2] The final piece was found in the underwater city, and Professor Pericles stole it.[4]

The battle for the pieces ended when Mystery Inc., with some old enemies turned allies, managed to gain all the pieces and put the disc together.[11]

Velma managed to create a machine to read the disc, but one word appeared and it was "Nibiru."

The mummy-ghost of Friar Serra, who hid the disc piece inside the cheese, warned the current Mystery Inc. that the animal is the first to start the downfall, and "The dog must die!"[12]

Unfortunately, Pericles blackmailed Fred to return the disk to him, or else he would have his robots kill Daphne, forcing Fred to surrender it (much to the dismay of the rest of the gang).[13]

The disc was later used as a key.

The disc was destroyed when the entity was killed. 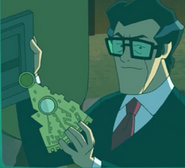 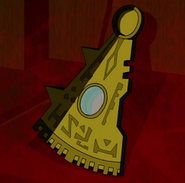 Retrieved from "https://scoobydoo.fandom.com/wiki/Planispheric_Disk?oldid=368283"
Community content is available under CC-BY-SA unless otherwise noted.