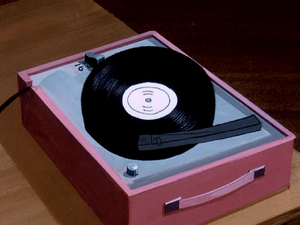 A phonograph, better known as a record player, is a device for the mechanical recording and reproduction of sound.

The phonograph used to play Colonel Sanders' will is a portable model, with a reddish brown case and a handle. The top is light grey, with a black arm, a grey volume control, and a black speed selector switch. A black power cord came out of the side.

The phonograph that the gang used in Hawaii was also a portable model, however it was a dark indigo color with a hinged lid and a large metal arm mechanism. The front face of the player had two knob controls and a speaker, and it had a hand crank on the side to power the unit.

Colonel Beauregard Sanders had left a message about the inheritance he had left for his relatives and Scooby-Doo, and how to receive it.[1]

At the gang's final luau in Hawaii, Fred Jones and Daphne Blake danced together to the music being played by the phonograph.[2]

Retrieved from "https://scoobydoo.fandom.com/wiki/Phonograph?oldid=361990"
Community content is available under CC-BY-SA unless otherwise noted.