The following is a list of parodies and pop culture references which have been made about the Scooby-Doo franchise in other media.

Jay and Silent Bob Strike Back

This Is the End

The Healing Powers of Dude

Josie and the Pussycats

King of the Hill

The New Adventures of Captain Planet

The Real Adventures of Jonny Quest

Two and a Half Men

Buffy the Vampire Slayer: Out of Mind, Out of Sight

Buffy the Vampire Slayer: Beauty and the Beasts

The Fairly OddParents: The Wand That Got Away 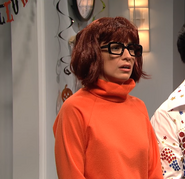 Teen Titans Go!: I See You

Timon and Pumbaa: Werehog of London

Tiny Toon Adventures: You Asked For It: Part I

Two and a Half Men: Above Exalted Cyclops 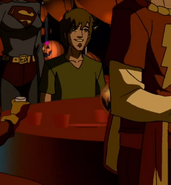 Young Justice: Secrets
Add a photo to this gallery

Retrieved from "https://scoobydoo.fandom.com/wiki/Parodies_and_pop_culture_references?oldid=371493"
Community content is available under CC-BY-SA unless otherwise noted.