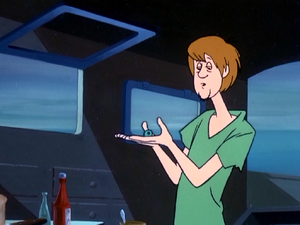 An olive is a fruit.

As Shaggy Rogers held the sandwich he made for himself in the kitchen of the yacht, the gang was riding in, Scooby-Doo poked his head through a window into the kitchen and quickly consumed it, whole, himself. Shaggy mused at the decorative olive left behind, and as he was about to eat it, Scooby quickly came back down for that to.[1]

Although he didn't seem to use them, Shaggy had put out olives on the table he was making his jaw-stretcher special, in the back of the Mystery Machine. Later, while he and Scooby searched the airfield's mess hall for food, they found Henry Bascombe's olives (among other food) in the refrigerator.[2]

Dr. Tooksbury had served olives and celery sticks as a side dish to the dinner he had prepared for the gang.[3]

Insert details here. (Lock the Door, It's a Minotaur!)

Retrieved from "https://scoobydoo.fandom.com/wiki/Olive?oldid=356496"
Community content is available under CC-BY-SA unless otherwise noted.