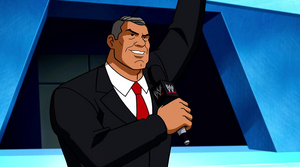 "No Chance in Hell" is the entrance theme of Mr. McMahon.

It's played the two times Mr. McMahon came on stage in WWE City's stadium arena. The first time was when he was going to show the audience (including the gang) at the end of a live show the championship belt for the upcoming WrestleMania, and the second was at the beginning of WrestleMania to introduce the belt being brought out which was placed next to the ring before started.

Retrieved from "https://scoobydoo.fandom.com/wiki/No_Chance_In_Hell?oldid=163005"
Community content is available under CC-BY-SA unless otherwise noted.