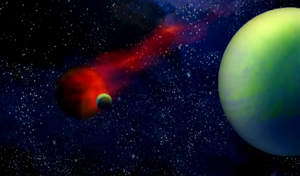 Nibiru is a legend well-known in Babylonian history.

It tells the story of how a large object, either a planet known as the Tenth Planet, Planet X or Nibiru, will collide with Earth. It is referenced as "The Doomsday Event". In this event, deity-like creatures called the Anunnaki from the planet Nibiru will arrive on Earth.

One known sentient of the planet was captured by its benevolent counterparts and imprisoned inside a crystal sarcophagus for crimes against humanity. Since then, for aeons, this being has plotted its escape, possessing animals and manipulating humans in attempts to free itself.

Spanish Conquistadors who were told of a crystal sarcophagus filled with black pearls found it, but the being inside possessed and controlled them, driving them insane and corrupting them as they ransacked the villages of former allies in search of treasure. However, they were eventually able to resist the Entity's influence enough to hide the treasure under what became later known as Crystal Cove; realizing the power of the Entity, they used a complex guide to mark the location of the sarcophagus, then broke the guide into six pieces, buried in six locations, to prevent people finding the Cursed Treasure. The conquistadors then scattered to the four winds, as were the pieces of the Planispheric Disk.

The first Mystery Incorporated eventually managed to find one of the disk's pieces before being disbanded; the current group have been working to gather and decipher the disc's pieces, discovering clues to keys from ancient Maya times along the way. More recently the word "Nibiru" has appeared in almost all of the incidents, being uttered by the deceased or even decoded from the Planispheric Disk.

"Nibiru" spoke through the ghost of Fernando El Aguirre, leader of the conquistadors, as Mystery Incorporated left Mount Diabla.[1]

Abigail Gluck said it when Mystery Incorporated found her corpse.[2]

Velma Dinkley searched on her website for any information on Nibiru and discovered it to be the doomsday event. Unknown by Mystery Incorporated, after they connected the Planispheric Disk together, the sarcophagus in the lost underground city uttered the word "Nibiru" and laughed.[3]

Velma cobbled together a player for the Planispheric Disk, and it produced the word "Nibiru" also.[4]

After solving the mystery of the fake mummy of Friar Gabriello Serra, the true Serra briefly rose from the dead to warn them of "Nibiru", a cataclysm that was inevitable unless "the dog dies."[5]

Nova was put in the hospital, placed in a deep coma. During one of his visits, the monitor turned off showing that she died. Suddenly she awoke and warned Scooby-Doo, "Nibiru, Nibiru is coming."[6]

The Anunnaki who possessed Nova to warn Scooby, then appeared in his nightmare telling him that Nibiru was coming. She told Scooby-Doo to destroy the cursed treasure before the evil Anunnaki was released within the crystal sarcophagus. (Stand and Deliver)

When the gang attempted to destroy the Evil Entity, Nibiru arrived and all the planets were aligned.[7]

Retrieved from "https://scoobydoo.fandom.com/wiki/Nibiru?oldid=374542"
Community content is available under CC-BY-SA unless otherwise noted.