This article is about nets in the standard continuity. For nets in other continuities, see Nets (disambiguation). 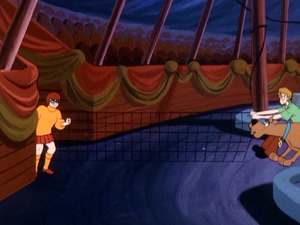 A net is a grid-like device for blocking the passage of certain items or animals. There are different types of nets, including cargo nets, fishing nets, and butterfly nets, or in sporting goals in games such as soccer, basketball, and ice hockey. A net also separates opponents in various net sports such as volleyball and tennis. They're also used at the circus as a safety precaution in trapeze acts.

Above all this, its primary usage is by Mystery Inc. in capturing the fake monster they're after, and to find out who is really underneath the mask.

Robopup used a net to capture Scooby-Doo under Mr. Gordon's orders, but he escaped by jumping through it.[1]

The Ghost of Buster McMuttMauler dognapped Scooby's parents with his net and caught the Doo family collar that the gang used as bait.[2]

The real Buster McMuttMauler attempted to catch Scooby with his dogcatcher net, he succeeded until a boulder from heavy objects used to crush Scooby crushed him instead allowing Scooby to escape. (Catcher on the Sly)

Shaggy, Velma Dinkley and Scooby attempted to stop a hypnotized Daphne Blake on a unicycle with a net, but when she rode into it, Shaggy and Scooby was flung away. (Bedlam in the Big Top)

Scrappy-Doo set up a Scrappy-trap for the alien at the cabin entrance, only to catch the gang instead. (Strange Encounters of a Scooby Kind)

Scrappy chased after Globby, trying to get back a coin he stole, leading him to the witch's hut, where the witch caught him in a net. (Swamp Witch)

While in Ireland, Scrappy caught Pat O'Wiley in a net and let him out when he agreed to hand over his pot of gold. (Scooby's Luck of the Irish)

Yabba-Doo and Deputy Dusty disguised themselves as ladies as part of a plan to trap train robbers with nets, but caught themselves instead. (Runaway Scrappy)

After a plan to rescue Dusty failed, Flint caught Scrappy in a net when the pup lunged for him.

At the river pirates' hideout, Yabba and Scrappy fired onions at the pirates who uses a blanket to send them back, the dogs do the same with a net, but the female pirate shoots a watermelon at them which was too heavy to bounce back and the dogs got trapped. (Up a Crazy River)

When the Faceless Phantom attempted to sabotage a film on top of a train scene, the gang trapped him in a net, but he broke free forcing them to flee. (Lights! Camera! Mayhem!)

Velma had a net as part of a plan to catch a vampire, but missed her chance when Shaggy and Scooby bumped into her while chasing a bat they believed to be Fred. (The Vampire Strikes Back)

Fred Jones, Daphne and Tex's gang flooded a van controlling two Phantosaurs and after bursting they trapped Babbit and Deitch in a net.

Fred trapped the Phantom when he cornered Shaggy and Scooby, but disappeared in smoke. They discovered the net had been cut, while Velma realized that Fred slept with a net.

Scooby-Doo! and the Beach Beastie

Fred became so obsessed with nets that he set up several net traps along the walkway to his front door and kept so much inside.

To get him away from nets, the gang took him to Daphne's uncle Sandy's Grand Sandy Resort only to find nets everywhere making Fred in great conflict with his net obsession.

While running away from a sea monster, the gang's left with no choice, but to use a net, inspiring Fred to make one out of film from video tapes, which he used to catch it.