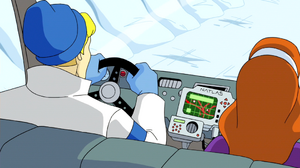 NATLAS was the Mystery Machine's "state of the art" global positioning system.

NATLAS has the appearance of a GPS system.

It is supposed to direct the Mystery Inc. to their direct destination.

The cold weather in the mountains was beginning to affect its programming, instructing Fred Jones to go to the right which would've taken the gang off the road and down the side of the mountain. It then went haywire, after which it told them they had arrived at their destination of Sunset Beach and to have a good day at the shore, making Scooby-Doo laugh.[1]

Scooby-Doo! and the Loch Ness Monster

Insert details here. (Scooby-Doo! and the Legend of the Vampire)

Retrieved from "https://scoobydoo.fandom.com/wiki/NATLAS?oldid=389330"
Community content is available under CC-BY-SA unless otherwise noted.