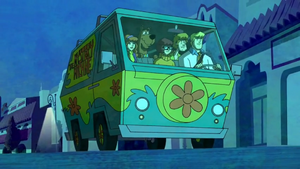 The Mystery Machine is a van owned by Fred Jones, Jr., who uses it for Mystery Incorporated's main use of transportation in their hometown of Crystal Cove, and anywhere else they may need to go.[1]

The Mystery Machine's shape lends itself to be a 1960s era panel van, however conflicting details does not indicate it to be a particular model of that lineage. The vehicle is painted a medium blue with a distinctive horizontal green stripe around the van, adorn with two orange flowers. Each side of the van has a distinctive painted green panel with "THE MYSTERY MACHINE" painted in orange. The front of the van has a spare tire carrier, painted green, with one large orange flower located in the center. Two roof racks protrude from the top of the van to secure further storage, and the van is also equipped with green and orange or yellow and orange flowered wheels or hub caps.

Fred has set many traps in it:

Wanting to solve the mystery of the Slime Mutant, Fred stole the hydrated cocooned body of one of its sewer worker victims, shoving him in the back of the van.[3]

While the gang were in Gatorsburg, the van's engine was stolen. They ended up escaping the town by rolling it out. When the solved the case of the Creeping Creatures, Mr. E had somehow replaced the engine.[1]

Daphne Blake wanted to get her lip gloss from the glove compartment, which had been turned into an ejection seat trigger which she was sitting on. Fred tried to warn her, but he was too late.[2]

The Obliteratrix made it look like she had destroyed the van, causing Fred Jones, Jr. and the others much anguish, but it turned out she destroyed a duplicate vehicle.[4]

It was used as a heavily armored decoy in the caverns, remote-controlled by Fred, until it was destroyed.[5]

After the Evil Entity was sucked into a black hole, it caused a chain reaction which altered reality in which Crystal Cove was not negatively influenced by its corruption. The gang had whole productive lives already built for them and Fred's van had been restored, but was gray, as the Fred in the new universe apparently had no need to paint it.

When the gang received a message from Harlan Ellison telling them he had enrolled them into Miskatonic University, they decided to take a road trip, but not before painting the van back to its original glory.[6]