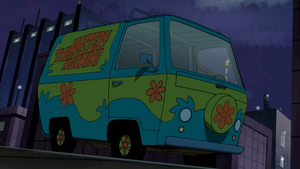 The Mystery Machine is the main transportation of Mystery Inc., taking them on their adventures all over the world. Fred is the owner,[1][2][3] and has a very strong attachment to it.[4][2] Although he was kind enough to lend the Mystery Machine to Scooby-Doo, Shaggy Rogers, and Scrappy-Doo for a few years, when they went on their own adventures, and then their time reunited with Daphne Blake, during their journalistic escapades. Occasionally, Fred would help them out and take over the driving in that time.

The Mystery Machine's shape lends itself to be a 1960's era panel van, however conflicting details does not indicate it to be a particular model of that lineage. The vehicle is painted a medium blue with a distinctive horizontal green stripe around the van, adorn with two orange flowers. Each side of the van has a distinctive painted green panel with "THE MYSTERY MACHINE" painted in orange. The front of the van has a spare tire carrier, painted green, with one large orange flower located in the center. Two roof racks protrude from the top of the van to secure further storage, and the van is also equipped with green and orange or yellow and orange flowered wheels or hub caps.

The previous owners of the van were a popular family band, known as the Mystery Kids. The van's design was painted by Flash Flannigan, the band's pianist, before he stormed off and quit.[1]

When the gang reunited to search for real ghosts, for Daphne Blake's show, Coast to Coast with Daphne Blake, Fred Jones, now her producer, surprised them all by removing a banner of the show's sign off of what was apparently their news van, to reveal the Mystery Machine logo underneath. The Mystery Machine now had a protruding engine in the front.[9]

The gang continued to use this new Mystery Machine for their subsequent adventures,[10][11][12] though they did have a nostalgic encounter with the original model of the Mystery Machine, while inside the Scooby-Doo and the Cyber Chase computer game.[13]

Return of the "classic" Mystery Machine

The gang soon returned to the "classic" Mystery Machine, bringing it with them to Australia[14] and Mexico.[15]

The Mystery Machine was briefly taken over, apparently by a ghost, and chased its owners around town. The gang investigated and found that the mother of the Mystery Kids had sabotaged the machine to help her kids make a musical comeback.[1]

Scooby-Doo! and the Goblin King

The Mystery Machine was transformed into the Monstrous Machine.[16]

Scooby-Doo: Behind the Scenes (Those Meddling Kids)