For the woman in the same The New Scooby-Doo Mysteries episode, with the same name, see Myrtle (woman). 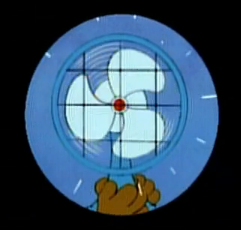 Myrtle is a top-secret army coding device, designed to look like a small mechanical fan. It also had a robotic male sounding voice, which could respond, as if it were alive.

It was so secret nobody was sure what it looked like, except that it was disguised as a household appliance and would respond to code phrases assigned by Lt. General Hepler: Scooby-Doo was given "Patty cake, patty cake, baker's man;" Shaggy Rogers was "I love you more than I ever loved anyone;" Scrappy-Doo was given "Go ahead, call the police. I dare you;" and Daphne Blake's was "So how much is that, anyway?" The Scooby-Doo Detective Agency was given the job of finding it in Pingree's Department Store by trying out the phrases on every item they could. It turned out to look like a common fan.

Retrieved from "https://scoobydoo.fandom.com/wiki/Myrtle?oldid=306453"
Community content is available under CC-BY-SA unless otherwise noted.