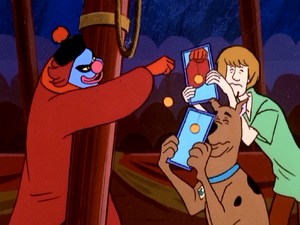 A mirror is a reflective glass.

Mirrors come in many shapes and sizes and are usually made of a pane of glass that has a reflective backing applied to it. Their defining feature is that an observer will see a reflection of themselves, other people, or their surrounds a person when looking at them.

Scooby's little sister Ruby-Doo was looking in a mirror, showing Daphne her outfit.[1]

Bluestone the Great used mirrors in combination with his projector to create the ghostly illusion of the Phantom.[2]

Shaggy and Scooby tricked the Ghost Clown into trying to hypnotize them again, but then closed their eyes and held up mirrors so that the Clown would see his reflection and hypnotize himself.[3]

Scooby was started by his reflection in a broken mirror, but Velma quickly pointed out that there was nothing to be afraid of and Scooby began making funny faces in the mirror. Velma was abducted by the Snow Ghost and Shaggy fell through a trapdoor while Scooby was preoccupied.[4]

Shaggy and Scooby searched the attic in Dr. Jekyll's mansion when Scooby opened the door to a wardrobe that contained a mirror. Scooby was once again started by his reflection and believed that the Ghost of Mr. Hyde had found them, though Shaggy's investigation revealed that it was nothing more than a mirror.[5]

Retrieved from "https://scoobydoo.fandom.com/wiki/Mirror?oldid=362806"
Community content is available under CC-BY-SA unless otherwise noted.