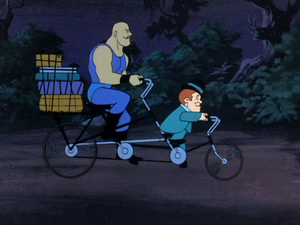 The tandem bicycle was used as transport by Max the Midget and Samson the Strongman.

The tandem bicycle was custom made with a smaller wheel and shorter seat for Max at the front and a normal size wheel and taller seat for Samson in the back. It has a grey frame and a shelf over the back wheel for luggage or other cargo.

Samson the Strongman and Max the Midget rode the tandem bicycle when they were leaving the circus, but the bike split in half. The resulting crash left Samson dazed and Max hanging from a tree branch. The gang witnessed the crash and came to their aid. Though Max believed that the bike was sabotaged, Samson dismissed it as another part of the jinx cursing the circus. They advised the gang to leave the area lest they be affected by the jinx and went about fixing the bicycle so they could be on their way.

Retrieved from "https://scoobydoo.fandom.com/wiki/Max_the_Midget_and_Samson_the_Strongman%27s_tandem_bicycle?oldid=362397"
Community content is available under CC-BY-SA unless otherwise noted.