Mattel, Inc. is an American toy manufacturing company founded in 1945 by Harold "Matt" Matson and Elliot Handler. It is headquartered in El Segundo, California. The products and brands it produces include Fisher-Price, Barbie dolls, Hot Wheels toys, Masters of the Universe toys, DC Comics toys, and WWE toys, and board games. Animated television series (He-Man and the Masters of the Universe) and direct-to-video films (Barbie), as well as a live-action film (Max Steel) have been produced based on their properties.

In 2000 and 2003, Mattel released Scooby-Doo versions of Barbie characters. In 2002 and 2004, respectively, dolls were released based on the two theatrical films.

In 2014, Mattel made two action figure packs based on the direct-to-video film, Scooby-Doo! WrestleMania Mystery. 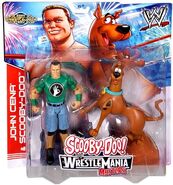 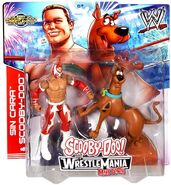