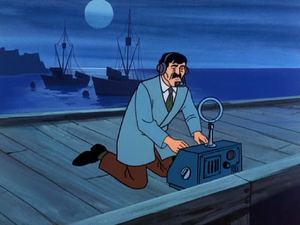 The marine life communicator is a special device created by Professor Ingstrom that allows communication between human and sea life.

When the gang followed the Caveman's footprints along the beach, it lead them to the docks where they witnessed Prof. Ingstrom use a strange device he used to talk with a dolphin. Scooby-Doo went to take a closer look, but made a commotion which startled the professor and he ran into the bait shack (where the Caveman inexplicably came from). It was discovered that Prof. Ingstrom's partner had dressed up as the Caveman to scare away Prof. Ingstrom from his device so he could take the credit for it.

Retrieved from "https://scoobydoo.fandom.com/wiki/Marine_life_communicator?oldid=275979"
Community content is available under CC-BY-SA unless otherwise noted.