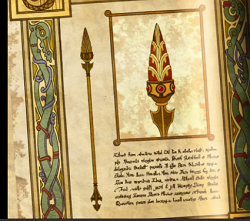 The Magic Staff was a magic item that was supposed to control the Gryphon of O'Flannery Manor.

It was hidden in O'Flannery's island tomb at Shadow Lake, which was supposed to be guarded by a Banshee.

Shaggy Rogers found the staff and used it to fight against the mechanical Gryphon of Marlon Merlin, and he brought it down, in a way fulfilling the legend.

Retrieved from "https://scoobydoo.fandom.com/wiki/Magic_Staff?oldid=391197"
Community content is available under CC-BY-SA unless otherwise noted.