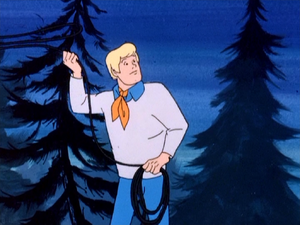 A lasso is a rope that is looped on one end so that it can be thrown around a target and tightened when pulled as a restraint.

Many different types of rope and cord may be used to make a lasso. A lasso's defining feature is its large circular loop on one end, created by tying a honda knot.

Fred lassoed a gargoyle on Franken Castle after the drawbridge closed and trapped Daphne in the castle. Shaggy and Scooby were then able to swing over the moat to the other side and lower the drawbridge so the gang could investigate the castle and rescue Daphne.[1]

Fred used a rope lasso to rescue Shaggy and Scooby, who had become frozen solid after they fell into the lake. Later, Shaggy made a lasso out of Christmas lights so that he and Scooby could swing away from the Headless Snowman. Though not intended, the Christmas light lasso successfully strung lights on what would eventually become Winter Hollow's Christmas tree.[2]

Retrieved from "https://scoobydoo.fandom.com/wiki/Lasso?oldid=364293"
Community content is available under CC-BY-SA unless otherwise noted.