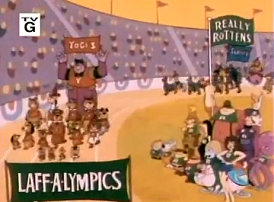 The Laff-a-Lympics is an Olympic sporting event held in different locations around the world. The competitors do not represent countries, but form three teams based on common friendships and goals. Many are talking animals.

Retrieved from "https://scoobydoo.fandom.com/wiki/Laff-a-Lympics?oldid=376039"
Community content is available under CC-BY-SA unless otherwise noted.