watch 03:27
Wiki Targeted (Entertainment)
Do you like this video?
Play Sound

This article is about the film. For other uses, see LEGO Scooby-Doo! Blowout Beach Bash (disambiguation).

LEGO Scooby-Doo! Blowout Beach Bash is a direct-to-video film, based upon the LEGO Scooby-Doo! first wave, which in turn is based upon Hanna-Barbera's Scooby-Doo Saturday morning cartoons. It is the second LEGO film, and was released on Digital HD on July 11, 2017, followed by a Blu-ray and DVD release on July 25.

The gang go to Blowout Beach, where ghost pirates are causing havoc.

Meanwhile, the Scooby Gang have caught and unmasked the villain Dr Najib!, who was disguised as the Mummy. Shaggy would like to escape the museum and go somewhere sunny. Velma and Fred both want to stay at the museum. Daphne is with Shaggy, and she'd like to go somewhere fun. The police-officer arresting the Mummy tells them to go to the Blowout Beach Bingo Bash, and the group hops in the Mystery Machine to go. Velma is planning a schedule to optimize their fun. Shaggy and Daphne think this is unnecessary, but Fred is all in favour of it, saying schedules are one of his favourite types of planning. Velma and Fred say they are fun, and not obsessed with mysteries but Daphne and Shaggy disagree and Shaggy goes on a tangent about Food with Scooby-Doo. Fred and Velma say that they're going to prove how fun they are by winning the Captains of the Blowout Beach Bingo Bash.

Daphne notes that the town seems deserted, but Velma suggests everyone is at the boardwalk. The Boardwalk is also deserted, so Fred suggests they check-in to the hotel. They bump into two teens who are leaving, and are told about the ghost pirates by the hotel's owners, Mr & Mrs Holdout. Shaggy and Scooby try to leave, but Fred stops them. The Hotel owner's kids were Captains last year, so Velma suggests getting to know them to maximize their fun. The two kids, Chad and Krissy, appear and are rude to the Scooby Gang, saying that they're the captains and there's no way Velma and Fred could replace them, before leaving. The Holdouts point the gang towards a portrait of the pirates on the wall, and then Mr Holdout tells them the history. The smugglers basically owned the town, and built tunnels all around the town. After a brief argument, the Holdouts finish the story together. The smugglers were so happy with their riches that they threw a party that lasted three days. On the third day of the party the navy caught up with the smugglers, but the smugglers had given their hats to two innocent teens, who became the first captains of the Blowout Beach Bash. When the mistake was realised, the real smuggler captains tried to escape but were blockaded into the harbour by more navy warships. Amidst the chaos of all the pirates being arrested, Captains Belle and Bash escaped with the treasure and were never seen again.

The sheriff and Mayor Dwight Monkfish interrupt the story and accuse the hotel owners of being behind the pirate attacks. The Holdouts counter accuse the Mayor, and the gang gets free passes for the opening of the Mayor's new rollercoaster tomorrow, except for Scooby, as there are "no dogs allowed". Fred follows the Sheriff and gets discouraged but decides to investigate anyway. Velma splits the gang up and gives everyone instructions, getting Shaggy and Scooby to agree by telling them about a wonderful restaurant. Shaggy and Scooby get a really boring tour of the pirate ship "Salty Brick", and are disappointed to learn that the snack bar has been replaced by an exhibit on barrels. After being told they can't leave, they decide to investigate the galley for food.

Fred and Velma are investigating a club called the Octo Rock Lounge, which is really quiet. They spot Chad and Krissy, who don't want them there and tell them to go away, again insulting Fred and Velma, this time calling them flies. Daphne is talking to the Mayor, who wants to tear down the boardwalk and build piers instead. The mayor's assistant Mitzi answers a few of Daphne's questions. Mr. Holdout used to give tours and tell a poem before he broke his leg in a bumper car accident. Mitzi tells the poem: If ye be looking to get rich quick, Then climb aboard the Salty Brick. Go on bow, tip our hats, respect great treasure and at the dawn shake hands for good measure.

The pirates stole the hats, and chased off everyone saying the bash was over. Daphne asks about the mayor, but Mitzi says that the Mayor really does care about the town in his own way despite being awful.

Velma accidentally invents a new dance move, and Fred and Velma teach it to everyone to try to become popular, singing and dancing to a song called "Do the Jinkie." Velma accidentally bumps into Krissy, and Chad and Krissy try to make everyone leave but get deserted by their crowd.  Shaggy and Scooby can't find the kitchen on the Salty Brick. While they're searching they bump into and get chased by the Ghost Pirates. A chase scene follows, and the boring tour guide get thrown out of the window. Shaggy and Scooby distract the pirates with a fake renovation show called "This Old Ship". They use this to trick the pirates into knocking a hole in the side of the ship and escape. The ghost pirates then steal the ship and sail it away.

Daphne finds Velma and Fred at the Octo Rock Lounge, and is confused to discover that Fred and Velma have somehow become popular. Fred and Velma don't want to talk about clues and just want to have fun. They accuse Daphne of being a party-pooper and a 'real Fred.' Shaggy and Scooby burst in start to tell Daphne about their adventure, when Daphne screams about the pirates, and the ghost pirates burst in and commence a chase scene. The gang eventually escapes the pirates behind the bar, and the ghost pirates vanish, kidnapping two of Fred and Velma's new friends, Tommie and Brenda. The gang starts arguing about whose fault it is that the pirates found the Octorock Lounge and are interrupted when Mr & Mrs Holdout show up and tell them to use teamwork and give them cookies.  Mr Holdout shows them a portrait of Belle and Bash's parrot, and Daphne asks about the poem he used to tell on the tour, but he says he doesn't remember it. The gang goes to their rooms, and arguments continue in the rooms. Scooby finds a secret compartment between the two rooms, and shortly gets everyone's attention from inside the wall and they join him, finding the secret tunnels that the smugglers originally built. They explore the tunnels which are full of eye-holes, and hear a strange noise which turns out to be the Holdouts telling off their children. They try to return to their rooms, but can't find their way back and get lost. Eventually they find their way to the police station and spot the policemen making furniture. They try to get out, but the policemen put the couch against the wall which makes the wall not move anymore. Shaggy starts to freak out, and mentions a crab, which Velma decides to follow and leads them out of the tunnels into a hidden cave which has the Salty Brick in it. They find the kidnapped teens on board and set them free, and Fred tells them to go for help. Fred starts planning a trap, but he and Velma keep getting distracted by planning new dance moves. Shaggy and Scooby bump into the Ghost pirates and run away towards the others, and a chase scene follows. The trap backfires and the gang are captured, and the pirates make them walk the plank, but Brenda and Tommie show up with a speedboat and rescue them. They speed out of the cave to escape but the pirates follow on the Salty Brick and open fire on the town, destroying much of the boardwalk and the Holdout's Hotel.

Around the bonfire later that night, the Holdouts lament that they won't be able to rebuild because the buildings are so old that they've lost the instructions. The mayor shows up and tries to make them sellout to him immediately, but Mitzi finally stands up to him and he storms off. Everyone is lamenting that it's over, but Fred lights up and says it isn't, and makes a plan for the next day.

They unmask the pirates to be Chad and Krissy, and Velma tells the motives behind the attacks. She explains that Chad and Krissy were not working alone, and that their parents Mr. & Mrs. Holdout had been helping them. Mr. Holdout states that they would have gotten away with it is it weren't for Chad and Krissy, their meddling kids. Mr & Mrs Holdout were the ones who destroyed the town, but they didn't sabotage the rollercoaster. Daphne reveals that the Sheriff and the Deputy sabotaged the rollercoaster, but they'll get away with it because they're the only law enforcement! Suddenly, Dr. Najib and police officer turn up, with the latter arresting all the bad guys.

Velma reveals the location of the treasure, and it spills out the bow of the ship as a pile of gems. Velma announces that it should be enough to rebuild the Boardwalk, but it's already been sold. The Mayor begrudgingly gives it back, saying that there's been enough bad guys today. In celebration, Brenda and Tommy declare that Fred and Velma are the captains, but Fred and Velma say that they're retiring and give the captain's hats to Shaggy and Daphne instead. A massive party follows. 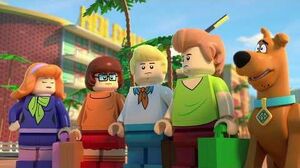 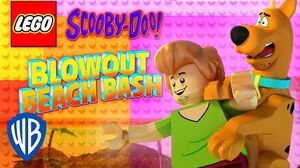 DVD.
Add a photo to this gallery

Retrieved from "https://scoobydoo.fandom.com/wiki/LEGO_Scooby-Doo!_Blowout_Beach_Bash?oldid=430845"
Community content is available under CC-BY-SA unless otherwise noted.