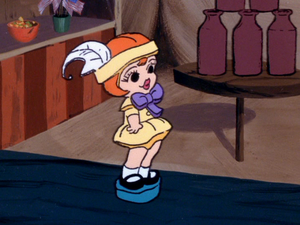 Kewpie is a brand of dolls. They were popular amusement park prizes in the third quarter of the 20th century.[1][2]

Fred Jones played an unnattended ball toss game while looking around Funland, with the girls. He won, and after turning their backs for a second, they found a Kewpie doll on the counter. Fred thought it be fair to pay for the doll, and when he put 25 cents on the counter, the cash register billed it.[1]

They were prizes at Dick Van Dyke's carnival.[2]

Retrieved from "https://scoobydoo.fandom.com/wiki/Kewpie?oldid=187079"
Community content is available under CC-BY-SA unless otherwise noted.