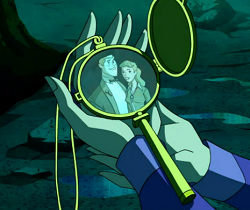 Judy Reeves's locket is a magnifying glass-shaped locket/necklace. Daphne found it in the caves of Crystal Cove.[1] It contains a picture of Brad Chiles and Judy, two members from the original Mystery Incorporated who were in a romantic relationship; It is known that Brad gave it to Judy.[2]

The locket will play a tune when it is opened, which Professor Pericles recognized and called a "little theme song."[3]

Judy lost it in the Crystal Cove Caves when she gave it to Professor Pericles to open a box containing a piece of the Planispheric Disk and traps were sprung that caused Pericles to drop it into rushing water.[4]

Insert details here. (Beware the Beast from Below)

Insert details here. (The Secret of the Ghost Rig)

Retrieved from "https://scoobydoo.fandom.com/wiki/Judy_Reeves%27s_locket?oldid=364799"
Community content is available under CC-BY-SA unless otherwise noted.