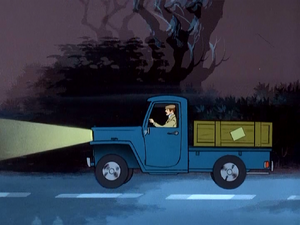 The pick-up truck was driven by Professor Jameson Hyde White.

The pick-up is a dark blue single-cab flatbed truck with chrome wheels.

Retrieved from "https://scoobydoo.fandom.com/wiki/Jameson_Hyde_White%27s_pick-up_truck?oldid=360500"
Community content is available under CC-BY-SA unless otherwise noted.