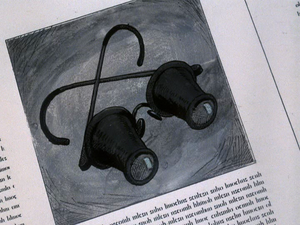 The magnifying glasses are owned by Professor Jameson Hyde White. They are a special type of optical lense made in England.

The magnifying glasses are thin framed wrap-around spectacles with round lenses. Conical protrusions help the glasses scale down to the proper size to hold their smaller magnification lenses.

Scooby-Doo found them at the County Museum while the gang dropped off the Black Knight armour after finding it on an abandoned pick-up truck driven by Prof. Hyde White who had disappeared. They researched the glasses at the Public Library and discovered that they were used by jewelers, scientists and archaeologists and were from England. This suggested that Professor Hyde White actually did make it to the museum, contrary to their previous belief.[1]

Retrieved from "https://scoobydoo.fandom.com/wiki/Jameson_Hyde_White%27s_magnifying_glasses?oldid=360376"
Community content is available under CC-BY-SA unless otherwise noted.