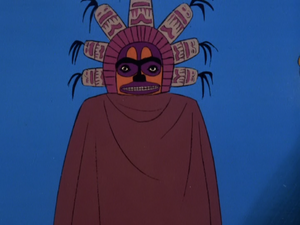 The Indian effigy is made of a mask and robe at the County Museum. Professor Jameson Hyde White was kept hidden under there by Mr. Wickles.

The effigy is a resembles a tall figures fully cloaked by brown robes. The ornate mask features a burgundy and red design with bared teeth and cutouts for eyes. Radiating from the mask are seven light brown pieces with designs on them and black tassels at the ends.

While en route to the museum to deliver the Black Knight armour, Prof. Hyde White was kidnapped and through an elaborate scheme by Wickles and his colleagues, he was gagged and bound the professor underneath the Indian effigy on display at the museum because he would've spotted the art forgery that was taking place there. He could only watch helplessly as the gang made their investigations there while trying to solve his disappearance. When Wickles's plot was uncovered, Prof. Hyde White still hadn't been found until Scooby-Doo found a shoe which led to discovering the professor under the Indian effigy.

Retrieved from "https://scoobydoo.fandom.com/wiki/Indian_effigy?oldid=360455"
Community content is available under CC-BY-SA unless otherwise noted.