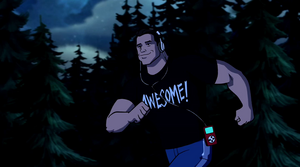 "I Came To Play" is a song that WWE Superstar, the Miz, listens to.

It was playing in the Miz's headphones while he was training in the woods outside of WWE City, before he was interrupted by Kane.[1]

Retrieved from "https://scoobydoo.fandom.com/wiki/I_Came_To_Play?oldid=241574"
Community content is available under CC-BY-SA unless otherwise noted.