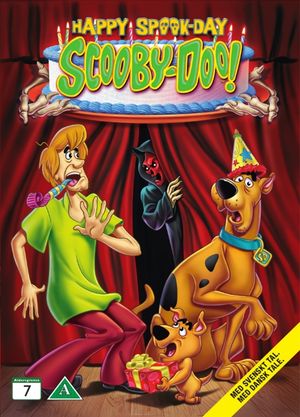 Happy Spook-Day Scooby-Doo! is DVD containing three episodes from two Scooby-Doo series. It was released in parts of Europe on April 9, 2012.

BIRTHDAY SURPRISES ARE IN STORE FOR SCOOBY-DOO!

Will anyone remember Scooby's birthday? A robbery at a TV studio turns out to be a ruse for a surprise party in Happy Birthday, Scooby-Doo, with host Mart Winkindale, a parade of pals and one dire enemy from Scooby's past attending! In The Backstage Rage, Scooby must figure out who's pulling the strings when he discovers a poodle in distress is really a puppet. Finally, scary wax creatures melt Scooby-Doo's mind in Don't Fool with a Phantom. The big dog's special day brings real laughs, chills and adventure for the unforgettable Scooby-Doo!

Retrieved from "https://scoobydoo.fandom.com/wiki/Happy_Spook-Day_Scooby-Doo!?oldid=284961"
Community content is available under CC-BY-SA unless otherwise noted.