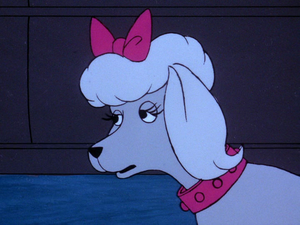 The girl dog puppet was a trick by Pietro the puppeteer to get his violin case full of counterfeit money away from Scooby-Doo, who was guarding it.

It looked like a cute girl poodle with white fur. It wore a pink bow on its head and a collar.

It acted like it had an injured paw. Whining and barking as it did so.

Pietro manipulated it to look like it had an injured foot and Scooby put down the case and went over to help. While he was distracted, Pietro grabbed the money.

Retrieved from "https://scoobydoo.fandom.com/wiki/Girl_dog_puppet_(The_Backstage_Rage)?oldid=379704"
Community content is available under CC-BY-SA unless otherwise noted.