watch 01:50
Wiki Targeted (Entertainment)
Do you like this video?
Play Sound

This article is about the original incarnation of the Ghost Clown from the Scooby-Doo, Where Are You! episode Bedlam in the Big Top​. For other incarnations, see Ghost Clown (disambiguation).

Revenge for being sent to prison

SDWAY: Bedlam in the Big Top

The Ghost Clown was the disguise of Harry the Hypnotist, who vowed revenge against Mr. Barnstorm's circus, after Mr. Barnstorm had sent him to prison for stealing.

The Ghost Clown has the appearance of a stereotypical clown; a silly costume, red hair and white make up on his face with a pink nose and lips. What separates him from a normal clown, is the evil grin on his face, his yellow eyes and his black eyeshadow.

The Ghost Clown thought he was in complete control. He liked to tell grim jokes; when for example Scooby-Doo was hanging in the air on a pair of balloons, the Ghost Clown said, "All what goes up, must come down". Usually such sentences were followed by an evil laugh. The Ghost Clown always tried to stay one step ahead of the gang.

The Ghost Clown had superb expertise in hypnotism, and with a gold coin hanging from a piece of string, could gain complete control over several members of the gang, including Daphne Blake and Shaggy Rogers in dangerous acts and environments. The Ghost Clown seemed to be popping up all over the circus, and he had a lot of nasty objects (like dart arrows) in his pockets.

During the gang's investigation of the circus, the Ghost Clown hypnotized Scooby-Doo to do the high wire act, Daphne to use a unicycle, and Shaggy to whip the lions. The gang soon attempted to trap him but they trapped a balloon copy of him instead.

Through a different plan, Shaggy and Scooby went to find him instead. When the Clown finds them, he tries to hypnotize them again, but Shaggy and Scooby used two mirrors to deflect his powers and prevent themselves from being hypnotized, causing the Ghost Clown to hypnotize himself into a chimpanzee. After this he became rather fond of bananas. He was then restrained in a cage and unmasked as Harry the Hypnotist.[1]

Scooby-Doo! and the Curse of the 13th Ghost

The gang had apparently been given the disguise as a keepsake, but when they were forbade to pursue anymore mysteries after nabbing the wrong guy, this necessitated to remove all trace of their past mysteries, which included having a garage sale of selling off the Ghost Clown mask along with other mementos.[2] 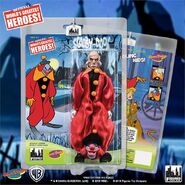 Action figure from Figures Toy Company.
Add a photo to this gallery

Retrieved from "https://scoobydoo.fandom.com/wiki/Ghost_Clown_(Bedlam_in_the_Big_Top)?oldid=427995"
Community content is available under CC-BY-SA unless otherwise noted.