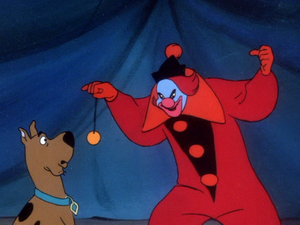 The gold coin belonged to the Ghost Clown. He used it in his revenge against the circus that fired him.

He used it as a hypnosis device. It hung from a piece of string, and as it dangled in the air, twirling around, the sparkles from the gold mesmerized his victims (such as members of Mystery Inc.) into doing whatever he wanted them to do. With a mirror, however, it can be used against the Ghost Clown to self-hypnotize himself.

Retrieved from "https://scoobydoo.fandom.com/wiki/Ghost_Clown%27s_gold_coin?oldid=197800"
Community content is available under CC-BY-SA unless otherwise noted.