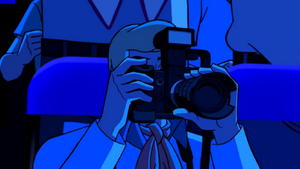 Fred Jones's camera was an illudium Q-36 SLR with an optical-stabilizer zoom lense.

Fred was occupied with his new camera while at the Burger Binge when Shaggy Rogers and Scooby-Doo told the gang that they wanted them all to go to together. After they had to be guilted into it by pictures of the two wearing embarrassing and dangerous bait disguises, Fred said it would be a good way to test out his camera.

During their time in WWE City (where the event was being held), Scooby and Shaggy were going to be sent to jail after they were accused of stealing the championship belt. Fortunately, Fred took pictures of evidence that would prove their innocence, only the camera was destroyed by the Ghost Bear.

Retrieved from "https://scoobydoo.fandom.com/wiki/Fred_Jones%27s_camera_(Scooby-Doo!_WrestleMania_Mystery)?oldid=365648"
Community content is available under CC-BY-SA unless otherwise noted.