Scoobypedia
Register
Don't have an account?
Sign In
Advertisement
in: Citations needed, Actors within the Scooby-Doo universe, Animated film characters,
and 12 more

This article is about the original incarnation of Fred Jones. For other incarnations, see Fred Jones (disambiguation).

Frank Welker for other actors, see below)

Fred "Freddie/Freddy" Jones[3] is the leader of the Mystery Inc. gang, and (more often than not) the driver of their van: The Mystery Machine. Fred is statuesque and brave; everything that the group's other male human member, Shaggy Rogers, isn't.

Over the years, Fred has come to build overly complicated traps for villains, which Scooby-Doo and/or Shaggy would often set off by mistake, only for the villain to wind up captured by the trap anyway. He also takes charge by splitting the group up to search for clues. Fred usually takes Daphne Blake and Velma Dinkley with him, while Shaggy and Scooby go off by themselves, although he would sometimes send Velma along with Shaggy and Scooby; Fred's main catchphrase is related to this divide-and-conquer clue search method: "Let's split up, gang..."

For a full list of what Fred wears, see Fred's outfits and disguises

Fred is a teenage male, with blond hair. His original and current wardrobe consists of a white sweater over a blue shirt and also wears blue pants. His trademark accessory is his orange ascot.

At the time Scooby-Doo and Shaggy Rogers moved into Shaggleford Manor, he was wearing a light blue jacket over a white shirt, dark blue pants, and brown shoes.

For many years, in the first period of his ascot days, he was the level-headed and stoic leader. Although in the later years, when he had become a mystery novelist, he showed signs of possible fear of being arrested after it was believed he was the Red Skull.[3]

His cowardice is further implied (during his blue-striped sweater years), when Fred, Daphne, and Velma have to split up to find Shaggy and Scooby in an Ohio Scooby Snax factory, and Daphne asked if he minded searching alone, with Fred reacts a little worriedly, "You mean by myself? In this haunted fact-" until he realised what he is saying and tried to act cool.[4] Another instance of this, was when Farmer P. came to them while they're investigating, offering them some warm milk to calm their nerves, with Fred politely declining. But after Farmer P. told them about the story of the devil farmer, Fred changed his mind and asked, "I think I'm ready for that glass of warm milky" in a scared tone.[5] Additionally, he also is shown as somewhat less intelligent, rather scatterbrained and more clueless to his surroundings. After Daphne comments on how Gary Snipper is "technically proficient," he adds that he's good at making things, too.[6]

As a child growing up in Coolsville, he was the polar opposite to the fearless leader type, being slightly hyperactive and superstitious. He was frequently picked on by Red Herring, the neighbourhood bully. He subscribed to a magazine, the National Exaggerator, that "reported" real monsters (his favorites being the Mole People and the mud monsters). Fred also almost always gets something wrong at the end of a case, as he always (or almost always) accuses Red as being the villain.

He also has an extreme obsession with nets, that he sets up traps along the walkway to his homes front door, sleeps with one and tries to decide which type to use when trying to catch the Ghost of Dapper Jack. His resistance was put to an ultimate test during his stay at the Grand Sandy Resort.

There have been instances where Fred has noticed and gained the attention of the opposite sex over the years.

Being only an amateur sleuth doesn't pay the bills, so Fred has had to find a source of income (and a sometimes a stable profession when the gang decide to part ways for a while), and has taken on a variety of different jobs through his life. This is a list of them:

Additionally, pre-teen Freddie was hired by his Uncle Eddie to write an article for the National Exaggerator,[21] and he and Daphne formed a singing duo to compete in Talent Star.[7]

Fred was based on the titular fictional characters of Jack Armstrong, the All-American Boy from radio,[22] and the 1960's TV sitcom The Many Lives of Dobie Gillis (played by Dwayne Hickman).[23] Voice actor, Frank Welker, was specifically instructed to play it like the former by voice director, Joe Barbera.[22]

In the original cartoon series, and all but one of its spin-offs, Fred is voiced by Frank Welker; the junior high version of Fred featured in A Pup Named Scooby-Doo was voiced by Carl Steven.

Fred from A Pup Named Scooby-Doo. 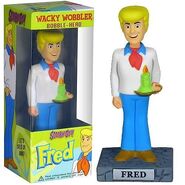