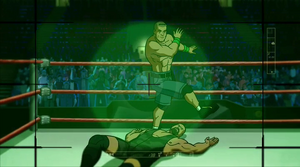 Five Knuckle Shuffle is a wrestling move of John Cena. The move is preceded by saying "You can't see me", while moving his hand across his face.

He later tried to take down the Ghost Bear with it in a cage match at WrestleMania, and momentarily succeeded before it got back up again.

Retrieved from "https://scoobydoo.fandom.com/wiki/Five_Knuckle_Shuffle?oldid=162973"
Community content is available under CC-BY-SA unless otherwise noted.